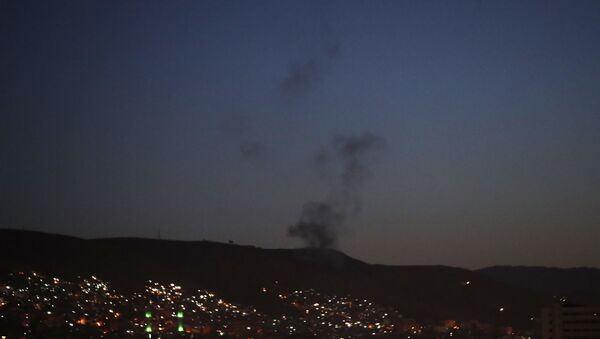 © AP Photo / Hassan Ammar
Subscribe
International
India
Africa
The United States, along with its UK and French allies, has unleashed a series of missile strikes against a number of locations in Syria over an alleged chemical weapon attack in the city of Douma, which the US leadership blamed on Damascus.

A sudden US-led missile attack against Syria managed to hit a number of targets within the country despite Syrian air defenses reportedly intercepting a number of incoming rockets, according to local media sources.

The targets hit by the attack include the Barzah scientific research center near Damascus, "which includes an educational center and scientific labs," according to the Syrian Arab News Agency (SANA).

Alleged photos of the facility prior to the Western attack have appeared on social media, however, their authenticity cannot be immediately verified.

Illegal, Reckless or Blessed, Morally Justified? US Congress on Attacks on Syria
The Russian Defense Ministry also reported that Dumayr Airbase, located to the east of Damascus, was targeted by twelve missiles but local anti-air assets managed to successfully intercept all incoming threats.

Located approximately 40 kilometers northeast of Damascus, the Dumayr Airbase was extensively used by the Syrian military during the ongoing conflict in the country, and a number of Western media outlets also claimed, citing Syrian anti-government militants, that the base was used to carry out the alleged chemical attack against Douma, which served as a pretext for the US-led strike.

Other targets in Greater Damascus reportedly include a military airbase in Mezzeh and an air defense base at Mount Qasioun, as well as military installations in the vicinity of Al-Ruhaybe and Al-Kiswah.

A total of 100 cruise and air-to-surface missiles were launched at targets in Syria by US warships deployed in the Red Sea, tactical aviation over the Mediterranean Sea and B-1B bombers from the al-Tanf area, the Russian Defense Ministry noted.

The Syrian General Staff also declared that the country's air defense systems were able to shoot down most of the missiles aimed at Damascus and at other targets located elsewhere in the country.