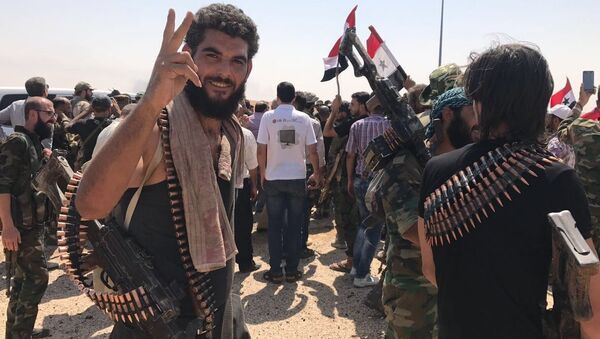 The last group of militants has left their last stronghold -- the city of Douma in the Damascus suburbs -- less than 24 hours after Western coalition members the US, the UK, and France fired over 100 missiles at targets inside of Syria in a response to an alleged chemical attack in the city.

Syrian army command has announced that Eastern Ghouta is now free of militants, state media reported. According to the SANA news agency, the Syrian army is determined to eradicate terrorism in Syria, regardless of what power backs the terrorism, in order to restore security and stability in the country.

"All the terrorists have left Douma city, their last bastion in eastern Ghouta," the army statement said.

At the same time, the Russian Defense Ministry said that 21,000 people, including militants and their family members, have been evacuated from Eastern Ghouta.

Maj. Gen. Yuri Yevtushenko, head of Russia's Reconciliation Center for Syria, said that 3,976 militants left Douma by bus on Friday. He added that at least 67,680 have left the embattled Damascus suburb.

Syrians 'Not Frightened' by Trump's Missile Strikes – Damascus-Based Academic
The tensions over Eastern Ghouta escalated rapidly last week after several media outlets, citing Syrian militants, blamed Damascus for using chemical weapons in Douma. Syria's Foreign Ministry denied the allegations, saying that a use of chemical weapons in the Damascus suburb had been planned by terrorist groups.

The Russian military also rejected reports of chemical weapons use in the area of Eastern Ghouta, citing doctors from Douma who denied media reports about receiving patients with symptoms of exposure to toxic substances.

Despite the information, Western coalition members — the US, the UK, and France — on Friday fired over 100 missiles at targets inside of Syria in response to the alleged chemical attack.