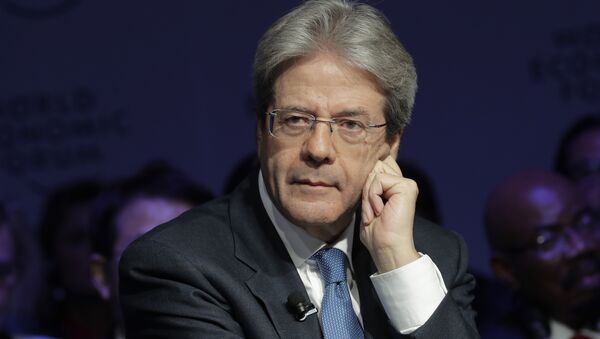 Italy has made it clear to its Western allies that it will not lend them its military bases to launch attacks against Syria.

"Missile attacks have been performed by the US and a number of European countries. We ally with them, and our ties with the US are special and tight, but at this point in time we insisted and made it clear that logistic aid on behalf of Italy does not mean that the strikes could be conducted from the Italian territory," Italian Prime Minister Paolo Gentiloni said.

The head of the Italian government, who had formally resigned, expressed hope that the strikes would not trigger further escalations and endorsed the resolution of the Syrian crisis by means of diplomacy. "It is not the time to escalate the confrontation, the time has come for diplomacy to give Syria democracy and pluralism after seven years of the horrid conflict," Gentiloni pointed out.

Separately, the Italian premier harshly slammed the use of chemical weapons.

"We must not return to the exploitation of chemical weaponry in conflicts on Earth, as it is prohibited under international law and our civilization does not deserve it. And the task of the whole global community is to prevent this from being used," Gentiloni noted.

On Saturday, senator Matteo Salvini, leader of Italy’s Northern league Party and candidate for the prime minister’s post, condemned strikes by the US, the UK and France on Syrian military targets.

"They are still looking for Saddam’s 'chemical weapons,' we are still paying for the craze of the Libyan war, and someone, having a finger on the trigger is insisting on 'smart missiles,' thereby aiding primarily Islamic terrorists, who are nearly defeated. Total madness, stop everyone," the politician wrote on his Facebook account.

READ MORE: 'US, NATO, Hands Off Syria': Protesters Burn US Flag Near Embassy in Athens

Salvini had earlier spoken out against the Western countries meddling in the Syrian civil war.

The United States, France, and the United Kingdom launched 103 missiles against Syrian targets overnight on Saturday, April 14, 71 of which were reportedly intercepted by Syrian air defense systems. The strikes had been conducted hours before an OPCW team was due to arrive in Douma, a city northeast of Damascus, tasked with determining whether the alleged chemical attack had taken place there.