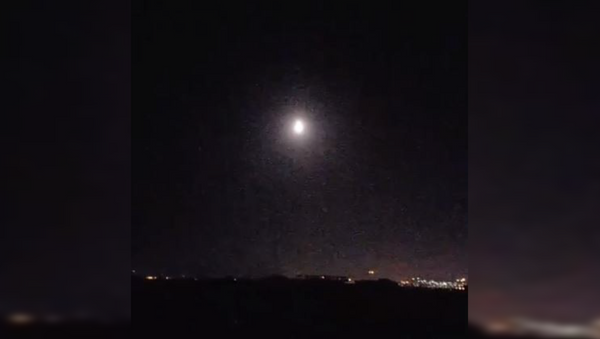 © Facebook Live
Subscribe
According to reports, explosions have been heard within Syria's Damascus region as US President Donald Trump announced on Friday that he was ordering US forces to "launch precision strikes on Syria."

Multiple unconfirmed reports have surfaced of Syrian military bases being struck by US, UK and French airstrikes. Reuters has stated that a scientific research center was also hit.

According to Reuters, Syrian State TV reported that air strikes are targeting Damascus and surrounding areas. The Syrian military is responding to the air strikes with anti-aircraft weapons. A total of 20 missiles were intercepted by the Syrian Army.

Several hours after the strike, the Russian Defense Ministry reported that the US, UK and France had targeted both the military and civil infrastructure. Russian military also said that none of the western coalition's cruise missiles had entered the zone covered by Russian air defense systems protecting the Tartus and Hmeymim bases.

​US officials told reporters that the strike involved Tomahawk cruise missiles, the same missiles that the US dropped on Syria in response to the alleged Khan Shaykhun chemical attack on April 7, 2017.

In a press briefing, the US Department of Defense stated that the operation was "specifically associated" with chemical research facilities and chemical storage sites. Three main chemical sites were targeted along with a command center.

​​Trump addressed the nation late Friday and announced that he would be giving the go-ahead for a missile strike.

"A short time ago, I ordered the US Armed Forces to launch precision strikes on targets associated with the chemical weapons capabilities of Syrian dictator Bashar al-Assad," Trump said at a White House conference.

Prior to Trump's announcement, Vice President Mike Pence had been summoned to his hotel in Lima, Peru.