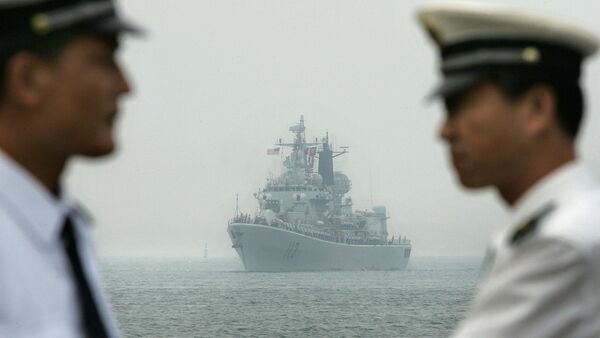 Following a massive missile attack launched by the US and its allies against Syria, it appears that Beijing is moving to make its opinion on the matter known via a show of strength in the Pacific.

One of the key goals of the upcoming Chinese naval drills scheduled to be held in the Taiwan Strait is a show of support for Russia over the latter’s standoff against the United States in Syria, the South China Morning Post reported citing a source "close to the PLA."

"[US President] Donald Trump’s warning of military attacks on Syrian forces was a bit of a surprise for Beijing and Moscow … As Russia’s strategic partner, Beijing is trying to cause some well-timed and controlled trouble for the US, a drill in the Taiwan Strait being the most plausible option that will benefit both Xi and his Russian counterpart, Vladimir Putin," the source said.

China Urges Parties to Syrian Conflict to Return to Norms of Int'l Law
Earlier, a large number of Chinese warships led by the Liaoning aircraft carrier had engaged in a series of live-fire military exercises in the South China Sea.

China Military, a newspaper linked to the People's Liberation Army, reported that 48 warships, 76 fighter aircraft and more than 10,000 PLA Navy personnel participated in the exercises.