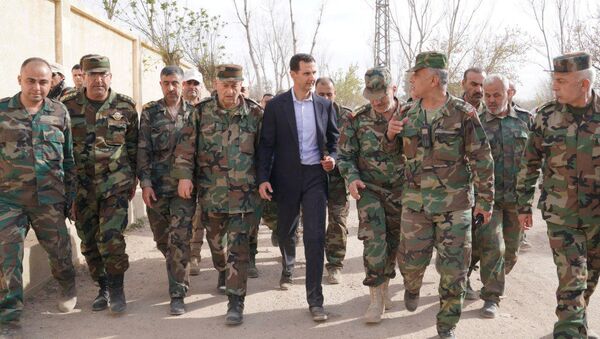 The 8-second video released by the Syrian presidency shows Bashar Assad arriving at work wearing a suit and a tie and carrying a briefcase.

The video, captioned ‘The morning of resilience’ and posted on the presidency’s Telegram channel, was apparently recorded shortly after a barrage of missiles launched by US, British and French aircraft and warships struck targets in the vicinity of the Syrian capital.

According to the Syrian General Staff, the country's air defense systems were able to shoot down most of the missiles aimed at Damascus and at other targets located elsewhere in the country.

The Syrian Foreign Ministry has also denounced the joint US, British and French strike on the country as "brutal, barbaric aggression," saying that the attack "aims at hindering the mission's work and preempting its results."