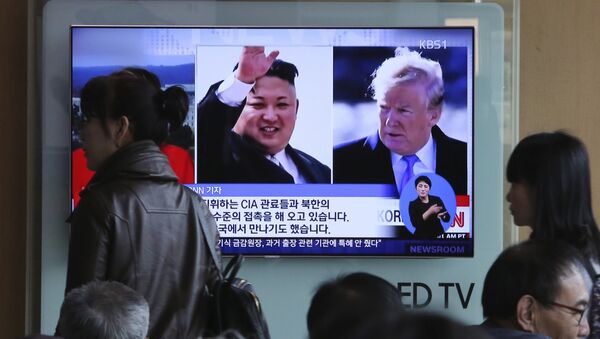 © AP Photo / Ahn Young-joon
Subscribe
International
India
Africa
Donald Trump tweeted the other day that the attack on Syria "could be very soon or not so soon at all" and that he has "never said when an attack on Syria would take place."

Sputnik has discussed Trump's controversial statements as well as the repercussions the move may have on the US-North Korea talks, slated for late May, with Jang Ji-Hyang, a Ph. D. in political science and a policy advisor on Middle East issues to South Korea's Ministry of Foreign Affairs, as well as a senior fellow at the Asan Institute for Policy Studies.and that he has "never said when an attack on Syria would take place."

Sputnik: Will a US Strike against Syria affect the upcoming US-North Korea talks?

Jang Ji-Hyang: North Korea and Syria don’t merely have diplomatic relations, but one can say that they are allies. There were even reports that North Korea had dispatched its combat troops to Syria. However, there is little chance that a US strike on Syria will be used as an admonition or a cue at the upcoming US-North Korea negotiations.

Also, Trump is seriously committed to denuclearization, and Kim Jong Un has made it clear that he is prepared to discuss the issue during the meeting; that’s why this won’t impact the would-be negotiations.

Trump will most likely do his best to prevent a strike on Syria from being deemed as pressure on North Korea, because it has taken him much effort to arrange the US-North Korea summit. Although Pyongyang will certainly feel the pressure, the US will try to assure North Koreans that they did not mean to exert it.

Trump is likely to demonstrate the sincerity of his intentions with regard to the upcoming meeting till the end, and will explain to the North Korean side that today’s military action against Syria is nothing but a demonstration of the US principles regarding nuclear, chemical and other weapons of mass destruction.

Nonetheless, if there have been deals to develop strategic weapons between Syria and North Korea, Pyongyang will take the issue much more seriously.

Separately, on May 12, Trump is expected to take important measures with regard to the elimination of nuclear stockpiles by Iran. And this can virtually have an indirect effect on the US-North Korea talks on denuclearization.

Sputnik: Can the US resort to similar ultimatums over strikes on North Korea if the talks reach a deadlock? How will the situation evolve in this case?

Jang Ji-Hyang: Pyongyang’s current stance is obviously different from the earlier one. If it is problematic to reach a compromise, North Korea won’t halt negotiations unilaterally.

Pyongyang’s primary task is to have  the sanctions lifted and to be recognized as a normally functioning country. Therefore, however young and controversial Kim Jong Un may be, however unpredictable his management style is, he won’t return to the logic of force on his own, just due to challenges at the US-North Korea negotiations.

DPRK is most likely to try, slowly but surely, to attain its goals. The same is true for Trump. A map of sanctions as well as a change of the global community’s view on "the normality" of this country will be up for grabs, but a return to the logic of force seems to be impossible. Therefore, the scenario of a "strike in 48 hours" and "limited war" is highly unlikely to be fulfilled.