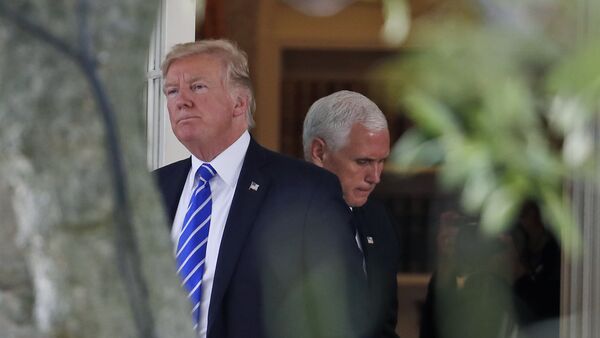 Washington's attempt to drive a wedge between China and Latin American states won't succeed, analysts told Sputnik, emphasizing Beijing's positive role and growing influence on the continent. As for Washington's concerns over increases in Sino-Latin American trade, the US establishment should blame itself for foreign policy flaws, analysts say.

The development of relations between China and Latin America is by no means aimed against other countries and the US, in particular, Jiang Shixue, the head of the Center for Latin American Studies at Shanghai University, told Sputnik China.

Trump Cancels Trip to Latin America to Focus on Response to Syria - White House
At the same time, the Chinese scholar continued, Latin America's economic growth plays into the hands of the US: First, it reduces the influx of migrants in the US; second, it decreases the flow of drugs into North America. By providing its assistance to Latin America, China "stabilizes the 'backyard' of the US," Jiang pointed out.

Washington is seriously concerned about China's growing influence in Latin America. On the eve of the Summit of the Americas in Lima, Peru, reports emerged saying that US President Donald Trump would seek to urge the countries of South America to turn their backs on China and bolster their trade and cooperation with the US.

Later, on April 10, the Trump administration announced that Trump had canceled his visit to the summit and would send Vice President Mike Pence instead.

For his part, China's ambassador to Peru, Jia Guide, warned the US against demonstrating "contempt not just for China but also Latin America." He refuted the claims that Beijing is interfering in Latin America's domestic affairs and cited the fact that China's trade with the countries of the region had increased by 18.8 percent to about $260 billion in 2017.

"China has become the biggest or the second-biggest trade partner for a majority of Latin American countries," Jia highlighted.

World
Moscow, Beijing See No Need to Compete in Latin America - Foreign Ministry
"I share the stance of the Chinese ambassador," Jiang said. "The development of relations between China and Latin America, and this is an integral part of South-South relations, is not directed against third countries. Quite the contrary, China's policy document, adopted in 2016, indicates [Beijing's] intention to increase cooperation with third parties in Latin America and the Caribbean. As for the US officials' statements on the Sino-Latin American relations, they have become commonplace for the American political circles."

The Chinese scholar pointed out that the US fears that China's military ties with South American states could somehow affect the security of the Western Hemisphere. Washington is also concerned that Beijing may support left-wing forces in the continent and undermine US relations with its neighbors. However, all these fears are obviously exaggerated, Jiang underscored.

However, Boris Martynov, deputy director of the Institute for Latin American Studies, at the Russian Academy of Sciences, believes that Washington's fears are in some sense justified. The Russian academic added that in any case, the US political establishment should blame itself for the chill between North and South America.

"China ranks first in trade with countries such as Brazil, Chile, Peru, second place in trade with Argentina, and is rapidly increasing its trade, economic and investment presence in Latin America," Martynov told Sputnik, adding that the US attempts to revive its influence and blackmail their neighbors have proven futile.

Sanctions, China-US Trade War Driving Moscow, Beijing Closer Together – Analyst
"The US foreign policy [in the region] has reached a stalemate," he remarked.

According to the Russian academic, the reason behind the current deadlock is an absent long-term foreign policy strategy in the US: "This is the result of business entering big politics, while professionalism in American diplomacy has long been gone," he opined.

"There are elements of short-term business [tactics] with the use of threats and blackmail," the academic explained. "For example, on the eve of the Summit of the Americas, the US undertook to teach China how to behave in Latin America."

Meanwhile, it was reported that US Trade Representative Robert Lighthizer had canceled his participation in the upcoming summit. This means that Mexican Minister of Economy Ildefonso Guajardo and Canadian Foreign Minister Chrystia Freeland — the two representatives of the NAFTA countries — will hold a meeting in Lima without him.

According to White House officials, Pence is likely to meet separately with four leaders of major economies of the region — Argentina, Colombia, Chile and Peru. However, it appears that the vice president is not going to hold talks with Mexican President Enrique Pena Nieto. According to media sources, Nieto's frustration over the Trump administration's political course toward Mexico is growing.