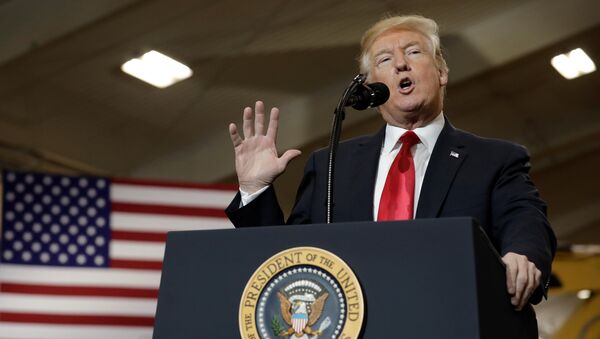 It appears that Donald Trump's threat to send "smart" missiles to Syria is nothing but hot air, Alexander Azadegan, professor of geopolitics at the University of California (UC), told Sputnik, suggesting that Washington is not in a position to unleash a new war on Syria and emphasizing that the US presence in the Arab republic is illegal.

One should keep in mind that US President Donald Trump likes to bluff, Alexander Azadegan, an ethnic Iranian, professor of geopolitics at the University of California (UC) and editor-in-chief of the Imperia News website, told Sputnik Persian, commenting on Trump's threats to attack Syrian government forces.

"Trump issued very serious threats towards Russia in his tweets. But in fact, his statements have no practical support. Therefore, these actions are just threats, it is a kind of psychological offensive to prompt fear," Azadegan said.

He recalled that on April 7, 2017, the US fired 59 Tomahawk missiles at the Syrian Arab Army's (SAA) Shayrat airfield, "retaliating" for an alleged chemical attack in Khan Sheikhoun on April 4. As a result, 28 missiles were repelled by Syrian air defense systems while the country's air force aircraft were not seriously affected.

"The US will not repeat actions that will bring disgrace on it again," the academic suggested. "In addition, Syria's air defenses have become much stronger due to military assistance from the Russian Federation."

'There is No Logical Consistency in Trump's Behavior on Syria' - Assistant Prof.
The scholar highlighted the fact that in accordance with the Constitution of the US it is Congress's prerogative to declare war, not the president's one. According to Azadegan, the US has been facing a serious problem of an "imperial presidency," which has emerged since the time of US President Richard Nixon and contradicts the principles outlined by the founding fathers.

"Washington is obviously very frightened by Russia's presence in Syria," the academic opined, adding that Russia has established permanent military bases in the country. "Russia is not going to leave Syria because of Washington's stupid mistakes it has made in the region in the last 10-15 years. The US feels that it is losing its control there. The US has already left Iraq which then teamed up with Iran. The US is suffering significant losses on many fronts in the region, that's why I don't think that a new war will be unleashed on Syria."

Azadegan pointed out that "for the first time in history" the Americans are operating in the Middle East absolutely illegally: "In particular, in Syria they have set up at least two bases from where they provide assistance to Daesh (ISIS/ISIL)* fighters and come to their rescue when it is in the US interest."

Democrats Slam Trump Tweets on Potential Syria Strikes, US Security Matters
The professor highlighted that in contrast Russia and Iran's presence in Syria is legitimate since both countries are Damascus's allies. "In case of any attack from the Americans [Moscow and Tehran] will defend Syria," he said. "If the Iranians are subjected to a sudden attack, the Syrians will also defend them and fight back."

However, in this situation there is a very sensitive moment, Azadegan highlighted: While solving its military tasks in Syria, Iran has become Israel's immediate "neighbor."

"If the number of Iranian military [personnel] in Syria and bases increases, then the threat to Israel will increase," he suggested.

According to the professor, the April 9 Israeli attack on the Syrian T-4 airfield was aimed primarily at Iranian military servicemen on the ground.

"Iran's response to this situation is quite logical: If the Israelis can approach Iran in the north of Iraq, which borders Iran, then the Islamic Republic has a similar right to become Israel's 'neighbor' in Syria and establish its bases there," the academic suggested.

Why Israeli Attack on Syrian Airbase, Alleged Douma Attack Fall Within One Trend
On April 9 two Israeli F-15 fighter jets attacked the Syrian Arab Air Force (SyAAF) T-4 air base in Homs province. The Russian Defense Ministry specified that five out of eight missiles were destroyed by Syrian air defense systems. However, 14 people including seven Iranian servicemen were killed during the airstrike. Israel's envoy to Russia was summoned by the Russian Foreign Ministry on April 10 over the incident.

It is not the first time that Israel has attacked the Tiyas (T-4) air base, where Iranian unmanned aerial vehicles (UAVs) are reportedly located.

In his Wednesday interview with Sputnik, former Iranian military correspondent Hassan Shemshadi opined that Tehran will not let Israel "go unpunished" for the death of Iranian military advisers in Syria.

The Israeli attack followed the reported use of chemical arms in Douma, Eastern Ghouta, on April 7. Several media outlets citing sources among jihadi militants reported about the chemical strike prompting Donald Trump to accuse Damascus, Russia and Iran of the incident. However, credible evidence to confirm the allegations has yet to surface.

In response to Russia's warnings against the potential military actions against Damascus on the part of the US-led coalition, Trump tweeted that Moscow should "get ready" for US "smart missiles" in Syria. Earlier, on April 9, the US president announced that he would make a decision about the US response to the alleged Douma attack "in 24 to 48 hours."

* Daesh, also known as ISIL/ISIS/IS, is a terrorist group banned in Russia and many other countries.