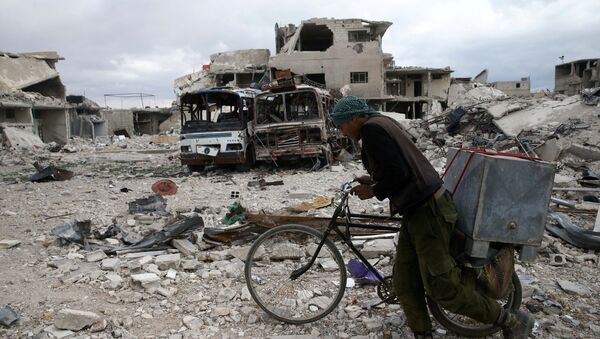 The US and its allies are still considering the possibility of a military response to an alleged chemical attack, blamed on Damascus.

Greek Prime Minister Alexis Tsipras has told French President Emmanuel Macron during a telephone conversation that Athens wouldn't participate in a possible military operation by the US and its allies, triggered by an alleged chemical attack in Syrian Douma, the Greek AMHA news agency reported.

The recent escalation in international tension around Syria is reasoned by reports from Syrian opposition outlets, claiming that the Syrian government was responsible for an alleged chemical attack in the country's city of Douma. unverified information was immediately shared by the White Helmets opposition group, which started posting unsubstantiated footage of the aftermath of the alleged attack, claiming that up to 70 people had died of "widespread suffocation."

Reacting to these claims, the US and its allies rushed to put the blame on Damascus, pointing to a "history" of such weapons being used by the Syrian authorities.

The Syrian side, in its turn, has denied these claims, specifying that the attack was staged by the terror group Jaish al-Islam to serve as a pretext for a possible external intervention in Syria. Enforcing its arguments, Damascus cited Red Crescent reports, saying they hadn't received any information about patients with chemical poisoning in the region's hospitals.

A similar point has been voiced by Moscow, who immediately sent experts from the Russian Reconciliation Center to the site of the alleged chemical attack in Douma after the reports emerged. The results of their soil probe showed no evidence of a nerve agent or any other harmful substance being used.