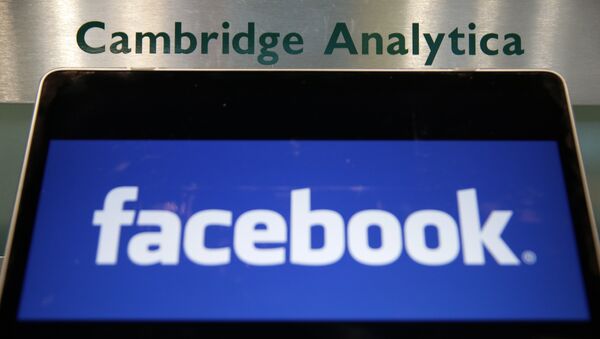 © AFP 2023 / Daniel LEAL-OLIVAS
Subscribe
International
India
Africa
It has been a big week for Mark Zuckerberg, testifying before two senate committees and the house committee on energy and commerce. Sputnik spoke with Occupy The Web (OTW), Forensic investigator, and hacker for Information Freedom and Social Justice, about the outcome of the hearings.

Sputnik: OTW, you heard Zuckerberg's testimony. What is the key thing we should take away from the outcome?

OTW: We have to give Zuckerberg a lot of credit for being very poised, and being very well versed and trained going into those hearings. He did a great job, much better than I expected him to do. But that is separate from what the content is. I have a lot of opinions about the whole mess of what happened with Facebook. I want to start by saying that people always have to keep in mind that if a service is free, you're not the customer, you're the product. That's very true with Facebook.

Sputnik: Do you think that Facebook will always remain a free platform?

He also said, and he was clear, 'We'd like to keep it free, so that we can make it available to a vast majority of the world.'

Sputnik: Will we see more regulation on things like third party sharing in the wake of Zuckerberg's trial?

OTW: I think we will see more regulation, and Zuckerberg said he was not opposed to that. He said it was critical to have light regulation. One of the things that also came up in the hearings, and I am a firm believer in this, is that big companies generally don't get hurt by regulations. It's the small companies. So, when the regulations go into place here, it's unlikely that it is going to have that much impact upon Facebook. It might very well impact up-starts, who are trying to challenge that position of Facebook, and no matter what industry you're in, it's always the same. If it's the banking industry, the railroad industry of the nineteenth century. Regulations go into place, and they end up embedding the power of the existing powerful firms.

There was a high focus on Russia, and their alleged meddling in the election — should this really have the focus of the testimony?

Sputnik: But what does that have to do with Russia?

OTW: There is some belief that Russia worked with the Trump Campaign to get elected. That's unproven as of yet, but there is certainly a concern that that took place.

Sputnik: Is there anything you think the public should know, having heard the testimony of Mark Zuckerberg?

OTW: The public always have to keep in mind, that if they put something up on the Internet, that you cannot presume that it's going to stay private. It's true when Facebook, Google, where ever, has access to it, and that means that other people have access to it, whether legally, or illegally. Anything you put on the Internet, you should presume that it's not private.

The views of OTW do not necessarily reflect those of Sputnik.