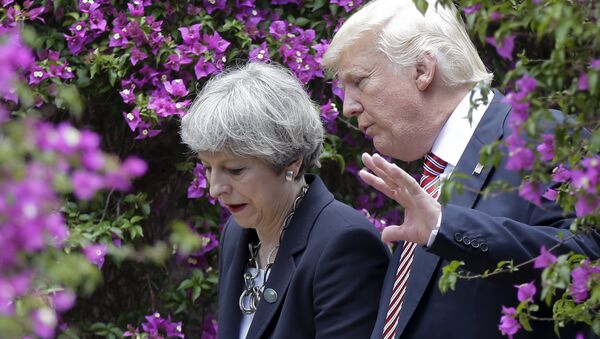 After speaking by phone, the US and UK government leaders said the countries would cooperate closely on an "international response" to the alleged use of chemical warfare in Syria's Douma, the UK government said Thursday.

First reported by Reuters, United States President Donald Trump and United Kingdom Prime Minister Theresa May spoke on Thursday about the tense situation in Syria, where the US, France, and UK have accused Syrian President Bashar al-Assad of using chemical weapons against a civilian group.

The Organization for the Prohibition of Chemical Weapons has sent a team to Douma, where their investigators will start a fact-finding mission on Saturday. Transparent and concrete evidence tying Assad to the attack has yet to emerge that would substantiating allegations made by the US and UK governments.

Trump met with the national security team earlier on Thursday, and is slated to speak with Macron on Thursday night in addition to the conversation with the British leader, the White House said Thursday.

May held extensive talks with her cabinet as well on Thursday. "Following a discussion in which every member present made a contribution, Cabinet agreed it was vital that the use of chemical weapons did not go unchallenged," the UK Cabinet said following internal meetings.

Publicly, Trump seems to have no idea what he actually wants to do in Syria. In late March, the president complained about US involvement in Syria and said US forces would withdraw from Syria "very soon." Following the alleged, and yet-to-be-independently-verified, claim of Assad using chemical weapons, Trump vowed to hit Syria's ally, Russia.

"Russia vows to shoot down any and all missiles fired at Syria. Get ready Russia, because they will be coming," Trump said in a April 11 tweet.

Kremlin spokesman Dimitry Peskov commented in response, "We do not participate in Twitter diplomacy. We support serious approaches. We continue to believe that it is important not to take steps that could harm and already fragile situation."

By April 12, Trump backed off the war threats, stating, "Never said when an attack on Syria. Could be very soon or not so soon at all!"