Twitter Sends Support to Mariah Carey, Who Opens Up About Her Mental Disorder 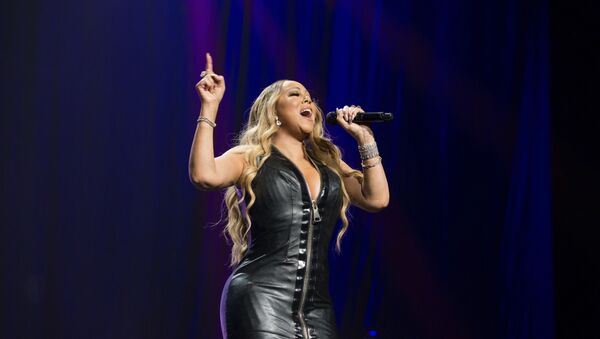 © AP Photo / Michael Zorn/Invision
Subscribe
The pop star, who had previously been slammed for diva-like behavior and several scandals, speaks out about her struggle with bipolar II disorder, which has lasted for nearly two decades. Twitter praised the revelation, expressing support and gratitude for her bravery.

US pop music star Mariah Carey revealed that she was diagnosed with bipolar II disorder, otherwise known as maniac depression in 2001, in an interview with People magazine. The celebrity, who is in therapy and takes medication now, decided to share the story of her battle with the public in order to help eliminate the stigma people with this mental illness endure.

The pop-diva herself came out after many years of living in “denial and isolation and in constant fear someone would expose me,” she admitted in the interview.

17 years ago, she experienced what was described as a physical and mental breakdown when her acting debut in the film "Glitter" failed.
"Until recently I lived in denial and isolation and in constant fear someone would expose me," she admitted in the recent cover story for the US outlet.

In her shout-out to those suffering from the disorder and those near and dear to them, she stated that bipolar disorder "does not have to define you and I refuse to allow it to define me or control me."

According to Mariah, what she believed to be a sleeping problem, turned out to be the onset of bipolar II disorder; symptoms include sharp switches of mood from euphoria or irritability to depression, as well as insomnia, weight loss or gain, and suicidal intentions.

READ MORE: US Deaths from Drugs, Alcohol and Mental Disorders Nearly Tripled Since 1980

Carey, who has been in the spotlight for nearly three decades as one of the world’s biggest pop stars, has made headlines not only for her shows and songs, but also a trail of scandals. However, over the past 15 years she got more media coverage for inconsistent performances and her relationship troubles.

The recent uproar came less than a year ago, when the 47 year old popstar was reportedly accused of calling her former bodyguard a white supremacist. The lawsuit also alleged that she sexually harassed him.

Despite all this Twitter was supportive, praising the singer for her bravery and raising awareness.

Looking in is so personal to me @MariahCarey this song is a masterpiece. Everything will be ok Queen. 🙌🏽👸😭😘😘 pic.twitter.com/CrHry9Zw4E

Mariah Carey is honestly brave af for publicly talking about her Bipolar disorder.

The world has labeled her “crazy” since 2001’s “Glitter Meltdown.” So for her to basically say “well this is why” & go public with it, even tho people are going to use it against her, Bravery.

In 2015, Mariah's brother said their mother "gave Mariah that beautiful opera voice, but her alcoholic behavior and bipolar disorder too." She grew up in a toxic environment, yet beat all the odds and became one of the most successful artists of our time. Mariah Carey is amazing. pic.twitter.com/lJFZbgh0gF

mariah carey is so much more than just a skinny legend. she is a trailblazer for pushing through her momentous, elusive career while learning to cope with bipolar disorder. she deserves nothing but admiration and respect from everyone.

Not all Heroes wear capes. Mine wears a Butterfly ring. 🦋🦋🦋@MariahCarey I love you forever and ever, to infinity. 💖💝 pic.twitter.com/IkZj5H82wj

Thank you @MariahCarey for sharing your story about living with bipolar II in @people mag. It’s bravery and courage like yours that can make such an impact for all of us who struggle and seek to thrive and not just survive.

Dearest @MariahCarey, you are NOT alone and you are LOVED! ♥️ #ProudLamb 🦋 pic.twitter.com/zDJOWaiX6u

you'll make it through the rain 💙@MariahCarey pic.twitter.com/c6VZ5QSflF

​Carey’s revelation came hot on the heels of other stars’ sharing their stories about struggles with mental disorders. Selena Gomez told Vogue about her anxiety and depression, while Chrissy Teigen wrote an essay about her postpartum depression and anxiety after she gave birth to her daughter.  Specifically Bipolar II disorder has also been an issue for Demi Lovato, Stephen Fry and Catherine Zeta-Jones, who publicly announced that they were afflicted.