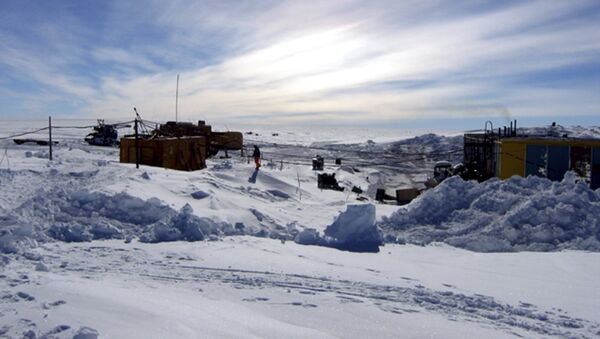 Antarctica has yielded its first vegetable crops, grown without soil or daylight. Scientists grew the greens at the Neumayer-Station III inside a high-tech greenhouse. The project aims to help cultivate fresh food on other planets.

Sputnik discussed the significance of the scientists' success with Norman G. Lewis, regents’ professor at the Institute of Biological Chemistry, Washington State University.

Sputnik: In your view, how significant is it that scientists have harvested crops in such conditions?

Norman G. Lewis: To me the most significant or exciting part the news release, at least for people on Earth, is that this environmentally controlled plant growth facility is called Eden ISS or International Space Station. It’s operational and functional, growing plants and vegetables, such as radishes and greens. It’s also an exciting project which is a large international collaboration drawn from scientists worldwide. In terms of significance it demonstrates that even in such harsh conditions on our Earth, with cold temperature and harsh wind conditions, scientists and engineers have some ways to successfully grow and harvest edible plants.

Sputnik: It’s obviously highly significant in terms of what can be done to maintain foodstuffs for astronauts whilst they’re living in space conditions, what can you add to that?

Norman G. Lewis: First this, what we’ll just call a controlled environment, this controlled environment helps protect the plants when they’re being grown from the conditions outside, let’s say in outer space. And of course they’re able to control the temperature, lighting levels, artificial light is used. They use things called LEDs, which are called light-emitting diodes and food that’s hydroponics they can provide water and nutrient delivery to the growing plants. So all these systems would have to be done on a space station during the colonization of the Moon or Mars etc.

We already know the joy the astronauts and cosmonauts can have attending to and seeing green plants growing in the outer space shuttle. For me it will be wonderful when we have astronauts and cosmonauts fully self-sufficient for fresh food, but this is still a little bit a long way off. Can I tell you a little funny story about an experiment that was on MIR many years ago? One of our Russian colleagues, who unfortunately has passed away now, and his wife wanted to see how an onion plant grew up in space and this was before we had wonderful telecommunications, videos coming down live etc.

They did it from the mission control center in Moscow and they got audio reports on how the onion plant was growing. So every week or every day they would get a report from the cosmonaut that was up there “yes, it’s growing, yes, it’s doing this, yes, everything’s going on.” Then, after a while, he didn’t want to talk about it very much and they said “How’s it going?” and he said “It’s going very nicely. Everything is fine. Can we talk about something else?” And he kept giving them less and less information and they said “Look we must know how the onions are doing” and he said “I’m sorry I’ve eaten them.”

Sputnik: This May you will be involved in a large plant study on the ISS. Perhaps you can just briefly tell us a bit more about that one?

Norman G. Lewis: We’ll use equipment, it’s called the Advanced Plant Habitat, and this is the first time it’ll be used in space. We began testing it on the ISS to grow a plant called Arabidopsis, which is a sort of a model plant species that scientists study extensively. So we made sure that the facility is able to grow and support plant systems up in space. Our experiment is named Arabidopsis GRO and of course meaning that we need the plant to grow and develop.

So what we’re doing is we’re putting the whole series of plants up onto the space station, Arabidopsis, and we’ll comprehensively study how this affects their genes, their proteins and their metabolites and how this compares and contrasts with Earth. For some of these plants we reduced what we call the lignin contents which is a reason, it’s a sort of bone like material that plants have got, that allow plants to stand up right and reach out towards sunlight.

So we want to see how, if we reduce this lignin content as well, whether we can actually make plants that are going to be more nutritious, but also to get this what we call foundational studies. We’ll grow the plant species out with what we call two grow-outs, we’ll recover the plants on Earth and we’ll find out comprehensively how the microgravity environment changes the way in which plants perceive and respond to that environment.

The views expressed in this article are solely those of Norman G. Lewis and do not necessarily reflect the official position of Sputnik.