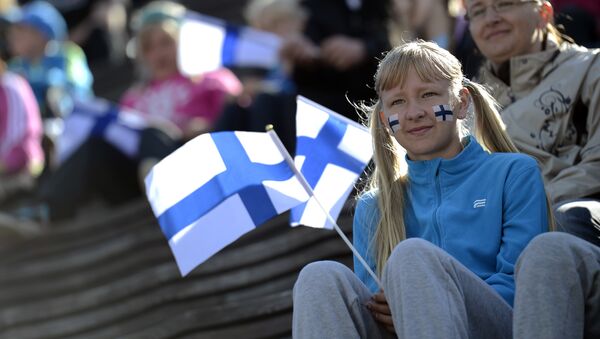 © AFP 2021 / JONATHAN NACKSTRAND
Subscribe
Finns under the age of 35 are increasingly open to the possibility of moving abroad, preferably to other European nations. Coupled with increasingly hospitable attitudes toward international labor, this indicates an ongoing internationalization of the millennial generation, that is, people born between the early 80s and the late 90s.

A recent survey from the Confederation of Unions for Academic Professionals Akava shows that 44 percent of Finns aged 18 to 35 are "likely" to leave Finland, citing better career opportunities, Finnish national broadcaster Yle reported. The survey was conducted by the pollster Aula Research and had a special focus on job-seekers who had a higher education.

In a reinforcement of the nation's increasingly globalist stance, an overwhelming 71 percent said that Finland's EU membership was of paramount importance, as it provided them with the sought-after opportunities. By contrast, only 18 percent were critical of the EU.

"The global and the international are for many college-educated young people obvious parts of the working life and an important way of developing their skills," Akava expert Miika Sahamies ventured.

Within the 18-35 age bracket, only 21 percent said they were positive about staying at home and not planning to move abroad. Among Finland's grown-up population, the situation is almost the exact opposite. Three quarters of those aged between 36 and 65 said they were unlikely to move abroad or didn't plan to do so.

Sahamies commented that young men and college graduates especially felt that moving abroad presented an opportunity, whereas the majority of the Finnish population would rather stay at home.

According to Sahamies, it is not surprising that the young adults have a warm attitude toward the EU, the outside world in general and the idea of "moving out." About half of Finland's student exchange and international cooperation programs are conducted through the EU student mobility program Erasmus, launched in 1987 and named after Dutch Renaissance theologian and philosopher Erasmus of Rotterdam. In the past three decades, over 235,000 Finns have taken advantage of this program (the nation's total population is under 5.5 million.)

"One can imagine that the international knowledge accumulated during the study period begins to be visible now, and even more so in the future," Sahamies ventured.

At the same time, 55 percent of the respondents felt that more international labor will be needed in Finland in the future for the Nordic nation to remain competitive. While Finnish expats may eventually be coming home enriched with new knowledge and skills, the need for extra workforce is still considered high.

To meet this demand, the Finnish authorities intend to lure foreign talent from non-EU countries with "startup residence permits." The organization Business Finland, which has a staff of around 600 people, has thus been tasked with selecting the most promising foreign companies, assessing their prospects on the Finnish market and eventually providing them with government funding. Jukka Häyrynen claimed that Finland had a deficit of immigrants with skillsets that couldn't be obtained within Finland and who therefore can create innovative companies.

000000
Popular comments
The quality of life in Finnland is hard to match anywhere, unless you are prone to depression. In this case, the long polar nights are a good reason to move.