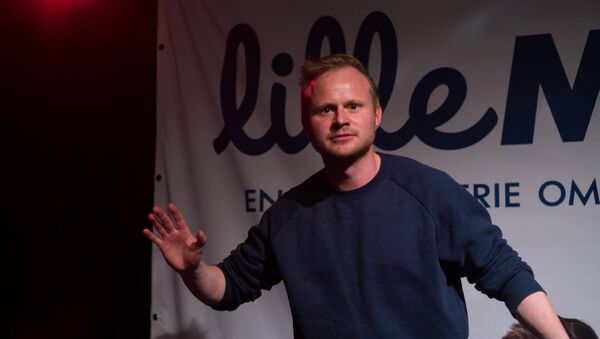 A Danish comedian, who has already earned an impressive reputation for mocking Sweden and its political correctness gone too far, has made a staggering comeback that left some Swedes applauding and others crying in anger.

Danish comedian Jonatan Spang has made another devastating sketch about Sweden. This time he directed his poignant sarcasm at "Information for you who are married to a child," a brochure launched and subsequently withdrawn by Sweden's National Board of Health.

In the sketch, Jonatan pretends to interview a Swedish official named "Hjalmar Johanson," who presents a list of brochures developed by the Swedish authorities, including titles such as "Good advice in connection with gang rape" and "Tips for mass murderers" and, last but not least, "Information for you who are married to a cat."

​"It solves many problems in a situation that can be quite difficult," the Swedish "official" said in the sketch.

"Thanks! Your satire makes it easier to breathe for me on this side of the strait," user Ninnis tankar tweeted.

Another user suggested that Denmark was merely "running Russia's agenda."

​In late March, a leaflet addressing the problem of child marriage caused a national uproar in Sweden and was withdrawn amid scandal. The brochure commissioned by the Swedish government was accused of providing perpetrators with guidelines (despite the fact that child marriage is forbidden in Sweden), as it included a separate section on sex. The Swedish news outlet Nyheter Idag reported that two like-minded brochures, "Information for those new to Sweden, under 18 and married" and "Information for parents or relatives to a married child" were commissioned, but later retracted secretly.

Earlier this year, a sketch made by the very same Jonatan Spang struck another blow against Sweden's overwhelming political correctness. In the sketch, a Swedish police officer lectures her Danish colleague that offenders have no gender. As he is taken aback by the Swedish ways of solving crime, she proceeds to inform that the culprit's police description only features a single word "person," as profiling by race, skin color or ethnicity could possibly frame a whole group of people. After the Danish policeman embarks on a rant against "Swedish policeman skimming through newspapers censored through and through and written by pussy-whipped, effeminate, 'metoo-y' and castrated journalists," he gets arrested and is led away in handcuffs.

Jonathan Spang is known for the TV series "Close to the truth," broadcast by Danish Radio. As his satire reached Sweden (and left many Swedes indignant), he ventured that Denmark merely was offering "humoristic Marshall's help."

"The more taboos there are in a society, the more it needs satire," Spang argued in an interview with Swedish national broadcaster SVT, voicing hope that Sweden and Denmark can unite to "reclaim Malmö," possibly alluding to the unprecedented wave of crime that hit Sweden's third-largest and most multicultural city.