The Sputnik Intelligent Punter's Guide to the 2018 Grand National 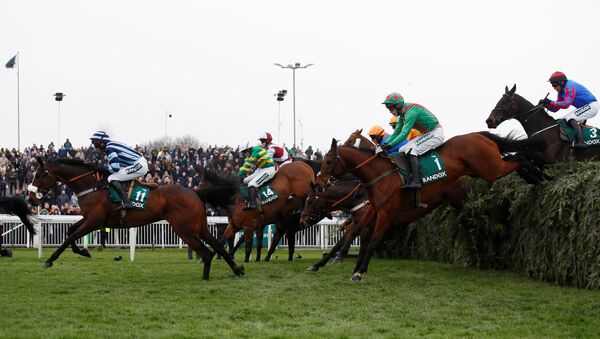 Neil Clark
All materials
AND THEY’RE OFF! Saturday sees the 2018 renewal of the most famous jumps race in the world - the Aintree Grand National. Forty horses will go to post in a race worth £500,000 to the winner. The start time is 5.15 pm.

Here's our horse-by-horse guide, in racecard order, to help you pick the winner!

Last year's Gold Cup runner-up, so has the class, and has won over 4m so stamina shouldn't be an issue; but no horse has carried 11st 10lbs or more to victory since the legendary Red Rum in 1974.

Looked a likely winner about half a mile out last year but jockey probably played his cards too soon and finished fourth. This time he's 9lbs higher in the weights, so winning will be tougher, but can't rule him out of a place given his excellent course record.

A staying-on third in the Gold Cup last month, he's 9lbs ‘well-in' for this; the concern is that the hard race he had at Cheltenham may have taken the edge off him.

2nd in 2016 off a mark of 149, he weakened in the closing stages last year off a mark of 161. This year he runs off 159, so while he should get round and run respectably, the weight is likely to scupper his chances.

Has done most of his racing over much shorter trips and so stamina will have to be taken on trust. Others make more appeal

Followed victory in the 2017 Hennessy, with a win over hurdles at Leopardstown, and was making headway when taking a heavy fall four out in the Gold Cup. Easy to see why he‘s the favourite; the concern is that Cheltenham may have taken the edge off him.

Trainer Mouse Morris won the race in 2016 and another of his entries ran well for a long way last year, so on that alone he's worth a second glance. He was plugging on at the death in the 2016 Irish National, over 3m5f and so the trip should be within his compass.

Ran well for quite a long way last year off a 2lbs higher mark. Would needed to have dropped more in the handicap to be considered a perfect candidate.

Pulled up four out last year as a seven-year-old; 3lbs lower in the weights this time round and should fare better but still question marks over stamina at this trip as five of his six wins have come over distances shorter than 3m..

Trainer did saddle the 100-1 winner of this race in 2009, but unlike Mon Mome, this one doesn't have the form over marathon trips. He could only finish 17th off the same mark of 152 twelve months ago and although he‘s had a much lighter campaign this time, hard to see him improving enough to win.

Classy Irish veteran who's a dual winner of the Punchestown Gold Cup, and while the trip could be within his compass, jumping errors have meant non-completion in two of his last three races.

Finished 8th 12 months ago, doing his best work at the finish and runs off the same mark. With eight non-completions and three wins in his last fifteen starts he‘s a hit or miss performer but softer ground this year, combined with a more positive ride, could help him improve enough to make the frame.

Has finished seventh and sixth in the last two renewals off marks of 146 and 149, but runs off 150 this time, so would need to find improvement from somewhere to win. Given his course record (he also won a Becher Chase over the National fences) he might make the frame.

2017 Midlands Grand National winner on soft ground- so stamina not an issue, but he has struggled off his revised mark after winning at Haydock in November and it looks like the handicapper has his measure.

Has a progressive profile, and has the right age and weight, but stamina is taken on trust as four of his five wins have come over distances shorter than 3 miles.

Scottish challenger has been well-backed and provided he takes to the fences, he should go close. He was a close-up third in the Scottish National in 2016 and will be suited by the testing conditions.

His record over these fences is two falls (including at the first fence in the 2015 National) a win, and a fifth place in last year's race. He might have finished even closer has he not been hampered two out and short of room at the last, so you can't rule him out of a place, even if he is 4lbs higher in the weights.

Has only had eight chase starts which is a negative and has a 13lbs higher mark to contend with after winning at Haydock in Janaury. He'll like the ground but others look more solid from a trends point of view.

Ran well for a long way in this last year, when a bad mistake at Valentine's put paid to his chances and 1lbs lower this time. Definite each-way chance.

Admirable veteran who's been placed twice in this race, and is lining up in it for the fifth time, but his age (no 13-year-old winner since 1923), and the ground are against him making it ‘fifth time lucky'

Only seven chase starts- and his three wins have come on good ground. He did jump round well over the course in the Becher Chase in 2016, and ran well in a race over 4m1f at Musselburgh in February 2017. Interesting outsider but ground looks to have gone against him.

Welsh National winner, who was eighth in 2014 and unluckily unseated last year; testing conditions will be right up his street, and while you can see him running well and possibly sneaking a place, no 13-year-old has won since 1923..

Wasn't stopping when winning the North Yorkshire National over 3m6f at Catterick in January so that augurs well for this consistent chaser staying this trip. On of the better outsiders representing the 2013 winning trainer Sue Smith.

Four of his six wins have come at Aintree on the Mildmay course and ticks the right boxes for age and weight. Would be a big surprise if he won but he could outperform his long odds.

No seven-year-old has won since 1940 and no mare since 1951, which are obvious negatives, but this one has had twelve chase starts and has some good form in staying races in Ireland. Value probably gone now though given the trends stats.

Completed the course but was well beaten in the 2016 National but has only had two runs since.
Not sure to stay and others make more appeal

Did complete the course in the 2016 National but was well beaten; and while he is 6lbs lower this time round, and could fare better, others look more solid from a win point of view.

Just four runs over fences and has raced mainly in small fields so up against it experience wise. Not one for the short-list.

2014 Gold Cup winner, who hasn't won a race since; however an each-way case could be made for him on the basis of last year's seventh place and the fact that he's 3lbs lower in the weights. That said a fall in the Becher Chase over the Aintree fences in December is off-putting and others look more solid.

Ticks the right boxes as regards as to age and weight, and jumped round the course ok in the Sefton Chase last year, good form at Haydock this season over shorter and clearly of interest; the big question is will he stay?

Dour stayer with plenty of experience who finished 10th last year when never really getting into the race. The slower conditions this time round and a 5lbs lower rating will aid his chances of improving on that, and he could well outperform his odds.

No real stamina issues for this dual Irish National runner-up but his age is against him now and four non-completions in his last five starts doesn't boost confidence.

Won the same Classic Chase at Warwick that last year's winner One for Arthur won, so that's a positive pointer. Has been running well since the New Year in top staying chases and while he should go well for a long way with jockey Bryony Frost- who's 1-1 on him, he would require a career best to win off current mark.

Has some good from in long-distance staying chases (was in contention when falling two out in the Midlands National, was sixth in the Scottish National in 2017 and a staying-on third in the Welsh National earlier this year) One of the better outsiders.

Was with the leaders up to the 2nd Canal Turn when his saddle slipped in the 2016 National and finished fifth on two previous runs over these fences. so that gives grounds for optimism, and he is also 4lbs lower than his last winning mark. Not sure if he'll stay but he could give supporters a good run for their money.

Sneaks into the race with the absence of Gold Present, but looks up against it. Was a very decent performer a few years back, placing in the 2015 Cheltenham Gold Cup, but has lost his way since, with no win since November 2015.