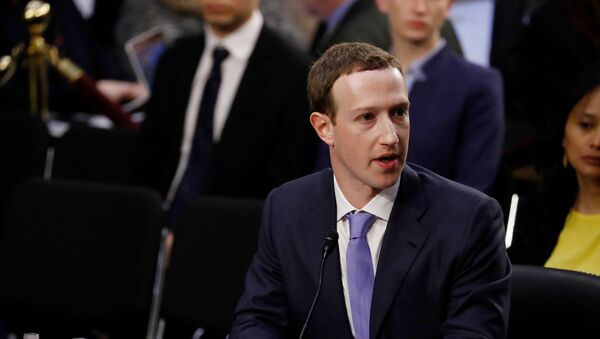 While many Facebook users’ hearts skipped a beat when the company’s founder was testifying before the US Congress on the Cambridge Analytica case, Twitterians were laughing their heads off, wondering if Zuckerberg was human.

Facebook CEO Mark Zuckerberg has testified before Congress over a data breach scandal: the Cambridge Analytica consultancy firm managed to obtain the social network users’ private info, which was used to predict and influence the behavior of US voters in the 2016 elections. Twitter users, however, have taken advantage of such a serious issue which has spurred much uproar on social media, with many calling to delete Facebook accounts as a sign of protest, to poke fun at Zuckerberg, who has, to be fair, repeatedly apologized for failing to protect private data.

Apparently, many of the Twitterians had watched the video of the testimony and noticed that Facebook’s mastermind was not feeling quite comfortable while seated…and it seems, they have found a solution to his slight problem:

It's not a "booster seat," it's his lithium-ion battery. #Zuckerberg

Others, at the same time, were struck by his emotions, with many wondering whether he was a cyborg:

There is a 100% chance Mark #Zuckerberg is a robot 😂 pic.twitter.com/KkXiInctXh

THE GUY IS REALLY CREEPY

We're witnessing the first trial of a human/android hybrid. This is history in the making, folks. History, I tell you!

.SEE HOW THE EARS GO UP WHEN HE SMILES AS HE PLANS TO SELL HIS PEOPLE DOWN THE RIVER? NICE TOUCH. VERY REALISTIC. There's a 100% chance Mark #Zuckerberg is a robot. pic.twitter.com/ffQWnj73Vn #ILLINOIS #CHICAGO @ILFARMBUREAU @CHICAGOTRIBUNE @PEOPLE @NEWSWEEK @GMA @enjoyillinois @WSJ

Zuckerberg should run as the first robot president for the Democrats. #FirstRobotPOTUS pic.twitter.com/CWDIKJpWfB

Some even “found” the person who was running Mark ‘Cyborgberg’:

Does anybody else not see zuckerbergs eyess changing along with the guy in the back as they smile? 👽👽

There were those who mocked him, and drew comparisons with the case of Julian Assange, founder of famous whistleblowing website WikiLeaks:

#Zuckerberg said fake profiles are not allowed on Facebook pic.twitter.com/FqYyRsQUzr