US and Allies Hold World in Terror Siege With War Threat 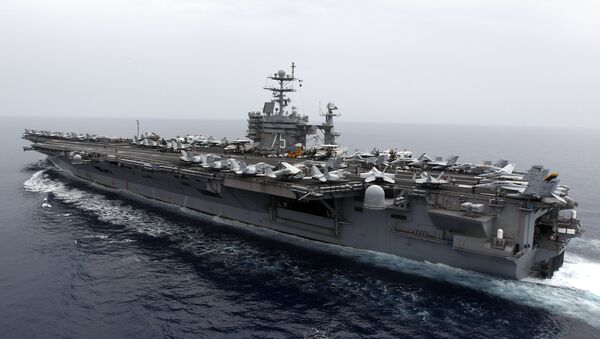 Finian Cunningham
All materials
So, the world is counting the hours to see whether the US and its allies will launch a military strike on Syria. If this war plan goes ahead, the attack will be furious - and the repercussions grave, as Russia sternly warned this week.

Indeed, we are talking about the very real danger that any US-led military action against Syria will rapidly escalate into a region-wide, or even world war.

Russia has alerted that any missiles targeting its ally Syria will be shot down and their launchers destroyed. The latter inevitably means US warplanes and naval vessels.

Already, Syria is set to explode into a wider war involving Russia and Iran on one side, and the US, Britain, France, Israel and Saudi Arabia on the other. Repeated lethal air strikes on Syria by Israel — again this week — are hardly met with condemnation, even when Iranian nationals were killed.

They have no evidence of the alleged incident, despite bombastic statements blaming Syrian President Bashar al-Assad and his Russian and Iranian allies. At times, the Western leaders even admit they have no evidence, saying "if confirmed" to qualify their condemnations. Yet on the basis of no evidence, the US, Britain and France are declaring preparations to strike Syria.

This is typical of the general degradation of international law by these three arrogant powers. The Skripal poison case in Britain is a particular illustration of how prejudice and contempt for due legal process have become par for their course.

The war threats against Syria are made even before inspectors from the UN-affiliated Organization for the Prohibition of Chemical Weapons have entered Syria — at the request of the Syrian government and Russia by the way — to carry out an investigation into the alleged chemical attack in Eastern Ghouta on April 7.

Moreover, there is plausible reason and evidence to show that the purported incident was actually a false-flag provocation staged by the Western-backed militants precisely for the purpose of creating a pretext for external military intervention.

Thus, President Trump and his NATO allies have absolutely no legal grounds for carrying out a military strike on Syria. It is entirely criminal what they are proposing to do.

Nikki Haley, the insufferably ignorant American ambassador at the UN, declared this week that her country reserves the right to militarily hit Syria — with or without a mandate from the Security Council.

This is tantamount to proclaiming a prerogative for lawlessness and unlimited aggression. The US and its allies are flouting international law to openly perpetrate the supreme war crime of aggression.

Adding to the obscene spectacle is the flagrant expedience of the three Western leaders.

Britain's Theresa May is facing the collapse of her government over the Brexit debacle, which is tearing her country apart due to immense economic uncertainty for Britain after it quits the European Union next year.

In addition, the Skripal poisoning affair has boomeranged to show that British Cabinet ministers have been caught out lying over allegations against Russia in a supposed assassination plot against a former Russian spy in England last month. British scientists lately admit they haven't confirmed the Russian origin of the alleged nerve poison, despite ministers earlier claiming they did confirm. Also, the Skripal affair is beginning to look like a farcical British propaganda stunt, which in truth resembles more a case of abduction by Britain's authorities.

As for France's Macron, his presidency is reeling from nationwide industrial strikes against plans to ransack workers' employment rights. Macron is so desperate to salvage his political and economic woes that this week he shamelessly pandered to the visiting Saudi Crown Prince to seek more multi-billion-euro arms deals. Banging the drums of war over Syria is music to the ears of the Saudi rulers, and Macron is banging furiously to ingratiate himself.

Trump, May and Macron — three politically damaged leaders — are pushing a war in Syria out of venal expedience. Regardless of any proof to justify their aggression, and regardless of the very grave repercussions involving a world war.

The audacity is staggering. Only 15 years ago, the US and Britain launched a war on Iraq based on lies over non-existent Weapons of Mass Destruction. As many as one million lives were destroyed by this American and British aggression.

Washington, London and Paris are currently supporting a genocidal war by Saudi Arabia against Yemen, where millions of children are starving to death due to a blockade of the country.

Meanwhile, the US and its allies are silently complicit as Israeli military snipers shoot dead unarmed Palestinians protesting against illegal occupation. And the Israelis post videos celebrating their cold-blood murdering spree.

Ex-UK Chancellor Urges May to Attack Syria, Let Parliament Ask Questions Later
Syria has been salvaged from a seven-year covert war for regime change orchestrated and sponsored by Washington, London and Paris, as well as Saudi Arabia and Israel, among others. It was Russia and Iran's military intervention that decisively defeated the terror proxies waging the war for Washington and its accomplices.

And now we have the Western state terror-sponsors threatening to attack Syria.

Of course, the conduct of Washington, London and Paris is criminal if they do go ahead with their military aggression on Syria in the coming days.

But even if these Western warmongers do not deliver on their threats to strike Syria, it is still abominable that they even make such threats. The incitement of war and blackmail to use military force is in itself a war crime.

Washington, London and Paris are holding the world to ransom with their wanton, self-entitled right to use violence — in complete contempt for international law. These three Western powers are engaging in state-sponsored terrorism against the entire world, by pushing the planet to the brink of all-out war.

There would seem to be not many options to rectify the appalling situation. Perhaps a war does indeed erupt, and Russia and its allies inflict military defeat on the arrogant US-led forces. Or perhaps, the people in the US, Britain and France finally recognize the warmonger leaders they have in their midst, and rise up to overthrow them.

The views of Finian Cunningham are those of the contributor and do not necessarily reflect those of Sputnik.