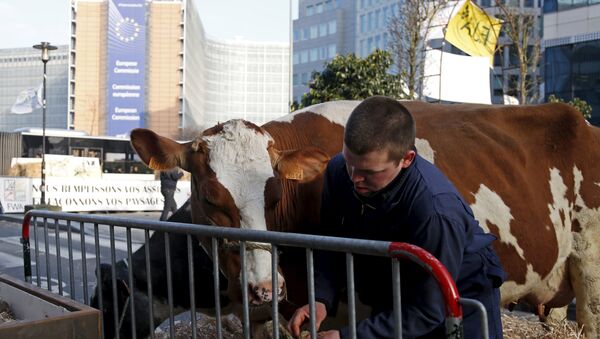 Britain's outspoken Secretary of State for Agriculture and the Environment Michael Gove has added to his list of innovative environmental by floating the possibility of Britain banning the export of live animals for slaughter after Britain leaves the European Union.

A public consultation period has begun to receive input and suggestions from members of the general public to determine whether all animals whose meat is exported should be slaughtered in the United Kingdom in accordance with British industry standards.

Despite accounting for only a small proportion of Britain's meat exports, concerns over the ethicality of transporting live animals and allowing them to be slaughtered in another country with different animal welfare laws have long been voiced by animal rights organizations and activists.

Since the invocation of Article 50 in March 2017, announcing the UK's intention to leave the bloc, opponents of Brexit have aired fears that British food standards will decline from current European benchmarks in order to negotiate new free trade deals with countries outside of Europe. The possibility of chlorinated chicken being sold in Britain from the United States, which circulated in the British press, provoked a highly charged public backlash.

Britain has so far committed to maintaining "regulatory alignment" with the EU, meaning it will adhere to European industry, food and safety standards despite not being a member state or a party to its economic institutions such as the Single Market. Secretary Gove however, has sought to convince the public that British industry standards will actually be improved by leaving the European Union.

Since taking office as Agriculture and Environment Secretary he has sought to illustrate this with initiatives to phase out diesel-fuelled motor-vehicles by 2040, plastic single-use straws and introducing a near total ban on the sale of ivory based products.

Today @michaelgove highlighted the importance of delivering an ambitious agricultural policy for our food and farming sectors at a #futurefarming event with @UKSustain https://t.co/L1lbq5wJjN pic.twitter.com/ICxDpEpQHb