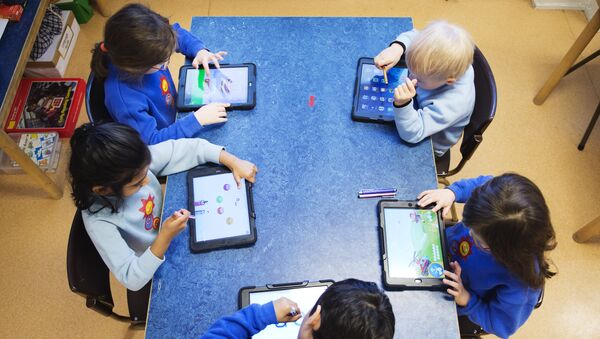 © AFP 2021 / JONATHAN NACKSTRAND
Subscribe
The school explained its unorthodox move as being in line with the recent trends in education prioritizing analytical skills above facts. Another reason is the rising percentage of non-Swedish pupils who have only spent several years in the Scandinavian country.

The Stureskolan School in the town of Boden, Norrbotten County, has in a pioneering effort introduced a ban on homework and tests in a bid to reduce the stress on students, national broadcaster SVT reported.

"We are constantly receiving new reports about our children not feeling well. And that's because they endure a very high stress level all the time. This is our way of trying to reduce that stress," school principal Petronella Sirkka told SVT.

According to Sirkka, there is a lot of research suggesting that assessing students formatively, as opposed to cumulatively, by means of various homework assignments and conclusive tests, is much better and less challenging for their psychological well-being.

"Our school plan is very complicated and places extremely high demands on students' capacity for analysis, and we are constantly trying to help them. In addition, the world is now completely different from how it used to be only a decade ago," Sirkka explained.

According to Sirkka, this is largely due to changes in the curriculum and the overall approach to education and learning. In the past, school education focused mostly on learning facts, today's approach to teaching has a greater emphasis on reflection and analysis, she argued.

"As more and more complex relations are being discussed, we tend to get bigger questions. And those are best handled at school, not at home," Sirkka told the Swedish daily Aftonbladet.

The recent changes in Swedish society are not the least of all factors behind the innovation.

"We have many newly arrived pupils at our school, almost a third have lived in Sweden for less than four years, and they do not get the same support at home as their peers. Therefore, we need to get better at the education situation instead of delegating the job to the home," Sirkka said, stressing the importance of the equality perspective.

For the time being, the ban will apply to all students and all subjects throughout April, apart from national tests that are mandatory. Should the test period go well, the goal is to introduce a full-time ban in 2019.

While Sirkka has admitted that pupils may later be in for a massive shock once they finish school and enter high school for further education — only to get more homework to cope with, he also stressed that the national tests for ninth-graders will remain in place. She reiterated, however, that while it is virtually impossible to remove tests altogether, the amount of homework and exams must be radically reduced.

The decision has triggered mixed reactions, the majority of them being positive, according to the principal.

"The pupils think it's great. Judging by the feedback, the parents also think it's very good. The Teachers think it might be difficult to change in the middle of the term, but we actually started this in February so they have had some downtime," Petronella Sirkka concluded.

The Swedish education system is generally considered permissive and sparing. Pupils do not start receiving official marks until the sixth grade.