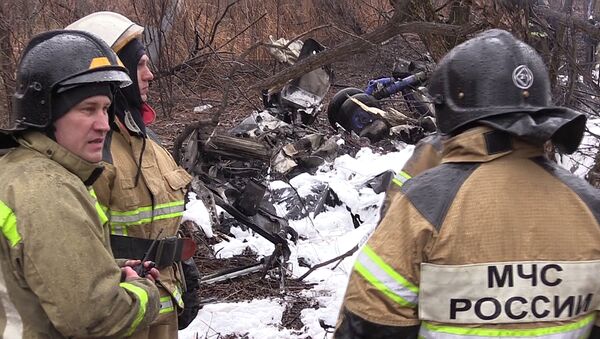 Six people were killed on Wednesday in a Mi-8 helicopter crash in the Russian Far Eastern city of Khabarovsk, a source in local emergencies services told Sputnik.

"At 11:30 a.m. [1:30 GMT] the crisis management center of the Russian Emergencies Ministry at the Khabarovsk Territory… received information that the Mi-6 helicopter made a hard landing… According to preliminary information, six people were aboard. The constructions have not been affected by the incident," the regional department of the Russian Emergencies Ministry said in a statement.

The chief doctor of the local hospital told Sputnik that no one survived in the accident, while Aleksander Vitko, the health minister of the Khabarovsk Territory, said that the medical workers had been engaged in the identification of victims.

Following the incident, a spokesperson of the Russian Investigative Committee said its personnel had already been already deployed to the scene, confirming that all six people aboard were killed.

"The helicopter crashed in the city at the Antennaya street. According to preliminary information, all six people aboard the aircraft are dead," the in the regional emergencies services said.

Earlier in the day, the regional department of the Russian Emergencies Ministry said in a statement that the helicopter with six people aboard made a hard landing in Khabarovsk. The preliminary data showed at that time that at least 2 people were killed and 2 more were injured in the accident.