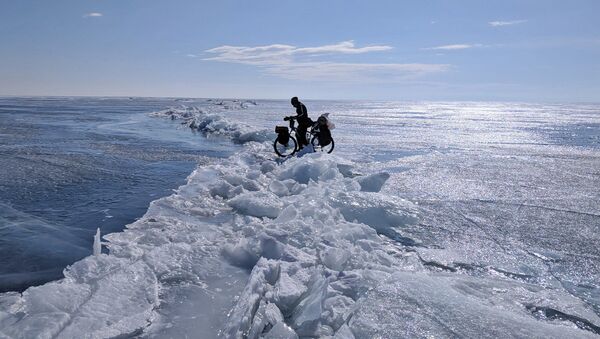 Nitin Gera from New Delhi and Anirban D. Choudhury from Kolkata spent a fortnight riding mountain bikes on the frozen Baikal Lake in March this year. This was a unique expedition, considering that Indians traveling to Siberia in winter is unheard of, let alone ice cycling. They spoke to Sputnik about their experiences from this unique expedition.

New Delhi (Sputnik): It was a quest for adventure that prompted Nitin Gera and Anirban D. Choudhury to take a break from the agreeable subtropical climate of their homes in India and experience the solitude of Siberian winters. In March this year, they packed their mountain bikes and supplies for a self-sufficient ice-expedition to a land that feels like a remote destination to an average Indian tourist.

Starting from Listvyanka, on the southern tip of Lake Baikal, they biked parallel to the western coast till Bugul'deyka, where an early onset of spring thawing made ice cycling an extremely risky proposition. 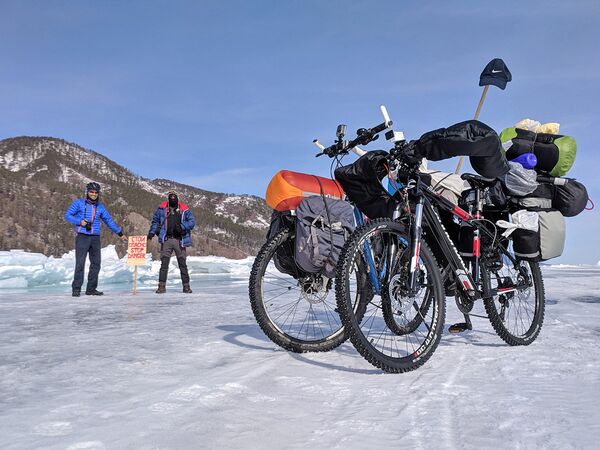 "It was a unique experience. I will never forget the thrill of riding on an endless sheet of ice and being able to maintain high speeds just like on metaled surfaces. This was truly the ice highway," said Gera.

For Choudhury, the adrenaline rush was in knowing that he was cruising over the world's deepest lake.

"I think the frozen surface was about one meter thick. The patterns on the ice were exquisite," Choudhury said.

During winters, Baikal is strewn with ice roads, but travelers still need to be on guard for crevasses. Both the riders slipped and fell into icy ditches a few times but any major mishap was avoided because they were careful and equipped with rescue ropes. Their bikes were fitted with studded tires that provided traction on ice, though riding through snow-covered sections was a slow and arduous task. The nature of ice biking is such that there are a variety of challenges and in Siberia, these are compounded by the harsh and unpredictable weather.

Gera recalled one particularly stormy day, "We were up against a gale. The wind speeds were close to 80 kilometers-per-hour and we had to move against it to reach the shore that was almost half a kilometer away. We were struggling to hold the bikes down, with all our strength, and almost crawling parallel to the ground. There was no one around to call for help; we were in a sticky situation."

Choudhury adds, "We truly felt the force of nature that day. Storm clouds were approaching. The shoreline was quite near but moving even a meter was too difficult."

They managed to cover the half kilometer to safety in a couple of hours. And then their hard work was rewarded by providence when they reached the campsite of a local family. They pitched their tents alongside them, all the while struggling with wind and rain. Soon after, they were treated to the generosity of the native folks.

"They were a family of seven, hiking and camping on their way back to Listvyanka. They shared their food with us and we gave them a carton of Marlboros as a gesture of gratitude. One gentleman was conversant in English. We had a good time cooking on the campfire with them and spending some warm and jovial moments amidst the chilly rain," Gera said. 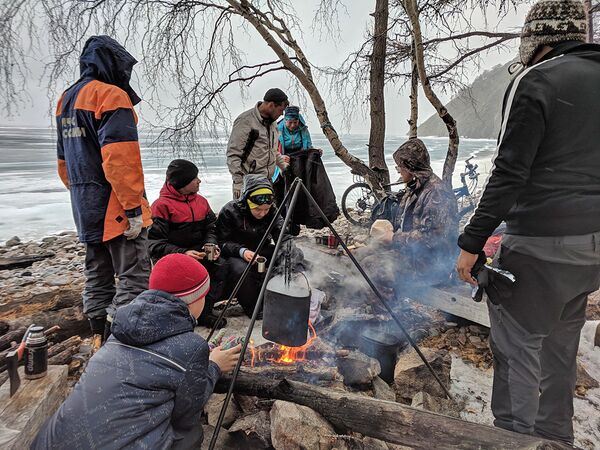 Gera and Choudhury camped at several stops on their itinerary. Whenever they were traveling close to a village, they boarded at homestays. There are a number of budget accommodations along the lake. Bigger towns like Listvyanka also have luxury hotels. There is an upswing in winter tourism in Baikal, as more and more international and domestic visitors go there to experience activities like dog sled and hovercraft rides.

They were initially worried about communication problems due to the language barrier as none of them know Russian and English is hardly spoken in rural areas.

"I was apprehensive that language would be a big problem but I was pleasantly surprised to see the ubiquitous use of Google translate. It made conversing a fun activity, almost to the extent of a slight mystery as to what the other person is typing and is going to convey," Gera said.

During their stay in Irkutsk, language wasn't a problem at all said, Choudhury.

"We became very friendly with the owner of our guest house in Irkutsk. Most of our conversations were about sports, especially UFC, [Ultimate Fighting Championship.] Apparently there are a lot of UFC fans there. And of course the upcoming FIFA 2018," Choudhury, who is himself an ardent follower of UFC and football, said.

Both the Indian travelers were heartened by the friendliness of the local folks. They claimed to have met pleasant people during their stay who were always willing to help, sometimes without even being asked. They were treated with scrumptious spreads of meals wherever they boarded. They met all sorts of travelers along the way — tourists who had come with package tours and indulged in luxury activities as well as domestic vacationers doing ice fishing.

Gera shared his traveler's tips, "There are many tour packages that one can buy and then everything is taken care of. But if you want to chart your own itinerary then you need to do some research and planning. Personally, I think it is better that way, only then you are really exposed to the local people and their culture. Besides, it's easy and safety is not a concern. There are plenty of accommodation options and people are really helpful. With a little experience, you can also identify camping sites."

Gera and Choudhury are experienced MTB riders and have done many such trips in Ladakh, in India. Having ridden on frozen lakes and rivers in the Trans-Himalayan regions, they felt that Lake Baikal should be their next destination. Gera found it to be the idle choice.

"I was looking for a challenging winter terrain, and Baikal meets the requirement to the T. [There is] almost 800 kilometers of ice surface, gale force winds, no civilization for kilometers, no surety of the firmness or thickness of the ice sheet, huge crevasses caused by shifting of the lake, and above all, the low temperatures of Siberian winters." Choudhary adds, "Siberia is mystical for foreigners. We've all heard a lot about it since childhood, its harsh winters, its desolation. What better place to start exploring Siberia than Lake Baikal."

The two Indian daredevils were looking for adventure and that's exactly what they found in Baikal along with its mesmerizing landscapes and warm memories of befriending kind and fun-loving people.