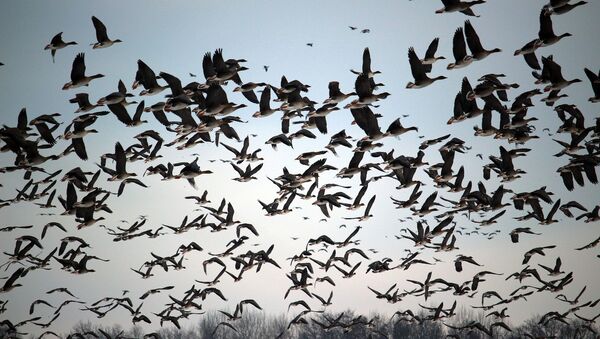 Officials with the Idaho Fish and Game Department were in for a surprise Saturday night after they found themselves dealing with a "freak accident" that involved more than 50 geese suddenly dropping dead in Idaho Falls.

According to officials with the department, the likely explanation for the deaths is that the birds were struck by lightning over the weekend as they migrated north. The discovery was made after a passing storm unleashed golf-ball-sized hail, lightning, winds and rain onto the Idaho community.

​"Several of the geese had their stomachs blown open and all of them were dead — none were injured," Conservation officer Jacob Berl told the Idaho Statesman. "Hail likely would have knocked them out of the sky, but they would have been able to glide down and land at different places."

Berl later told the Idaho State Journal that "it is common for diseases like influenza or other sorts of bird-borne diseases to cause mass die-offs of birds, but not for them to just fall out of the sky and land within a hundred yards of each other like that."

A total of 48 snow geese and three Ross's geese were found within a 100 to 200 yard radius of a parking lot near North Yellowstone Highway, according to the publication.

The first 50 birds, however, weren't the only ones the went belly up — another 60 were found dead on the roof of a local warehouse. 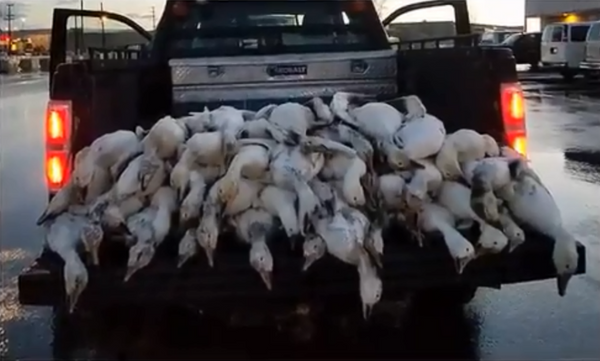 "All of them were dead," James Brower, coordinator with the department, told The Independent. "When the officer arrived, nothing was moving or twitching. Mother Nature is sometimes cruel to the wildlife kingdom."

"We worry about accidents with cars and trucks — sometimes animals are affected just by the weather," he added.

Although the two mass deaths made for a somber weekend, Berl noted on the positive side that geese are "pretty abundant" in the area.

"It's sad to see any animal die, but fortunately snow geese are pretty abundant and are not a rare or threatened species," he told the East Idaho News. "It was just a freak accident."

Wildlife officials will be shipping the birds off for autopsies to determine an official cause of death.