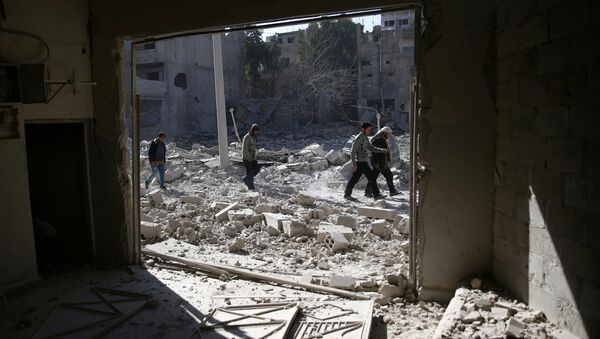 PARIS (Sputnik) - In the event France decides to strike Syria in response to the alleged use of chemical weapons by Syrian government forces in the city of Douma, it is more likely to launch the attack from an airbase located on its mainland rather than from its bases in the Middle East, Le Figaro reported on Wednesday.

According to Le Figaro newspaper, the French military command has already presented possible plans of action in Syria to Macron. The newspaper also noted, referring to air force specialists, that in the event military action is approved, the most likely scenario would be for France to strike Syria from its Saint-Dizier base, located in the country's northeast, not from its bases in Jordan and the United Arab Emirates, for example, since these countries do not want to be involved in military operations against their neighbor Syria.

OPCW to Send Experts to Syrian Douma to Probe Alleged Chemical Weapons Use
Reports about the alleged chemical attack in the Syrian city of Douma emerged on Saturday in Syrian opposition media outlets. The European Union and the United States have promptly blamed Syrian President Bashar Assad for the attack, but Damascus has denied the allegations.

Reacting to the purported attack, which lacks any substantial evidence, French President Emmanuel Macron said on April 10 that a decision on whether or not to carry out military activities against Syria in response to the Douma incident was being discussed between the French, US, and UK governments.

The media also said that Rafale fighters, taking off from the Saint-Dizier airbase, would need to be refueled three times in order to reach Syria.

According to the newspaper, the operation in Syria may become a "baptism of fire" for France’s Aquitaine multi-purpose frigate, which is reportedly operating in the eastern Mediterranean to combat Daesh* in Syria and Iraq. The Aquitaine could carry out the first powerful and quick strike at a distance of over 1,000 kilometers (621 miles), according to media reports.

*Daesh - a terrorist group, outlawed in numerous countries, including Russia