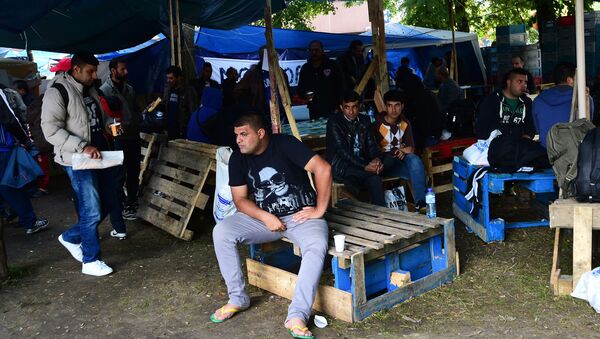 © AFP 2021 / EMMANUEL DUNAND
Subscribe
BRUSSELS (Sputnik) - A number of Belgian officials have called for a ban on the Islam Party, after the latter revealed its plans to establish Sharia law in the country as part of its political platform ahead of the October municipal election.

Last week, Islam Party leader Redouane Ahrouch announced that the party’s goal was to build an Islamic state, with Sharia law being established in the country. One of the first proposals he voiced was the separation of men and women on public transport. The statements caused serious concerns in Belgian society and prompted calls for introducing bans on ideologies that clearly go against the country’s constitution.

Founded in 2012, the Islam Party won two mandates in that year’s local election and is now presented by communal councilors in Anderlecht and Molenbeek-Saint-Jean, communes with a high Muslim population.

This year, the party aims to nominate its candidates in 28 Brussels and Walloon communes.

Two parties of Belgium's coalition government – the New Flemish Alliance (N-VA) and Open Flemish Liberals and Democrats (VLD) – have already expressed their intention to work out constitutional amendments to introduce a ban on the registration of such political organizations, as the Islam Party, the ideas of which they qualify as extremist.

The politicians stressed the need to have the amendments implemented before the 2019 general election which is scheduled for May.

Richard Miller from the VLD, a member of the Belgian parliament, who submitted two proposals for amending the Constitution, said he had sought to ban the party since 2012, the very year of its foundation.

"This project is a threat to our freedom and the fundamental rights that are part of our Constitution", Miller said, as quoted by The Brussels Times.

Belgium Mulls Ban of Islam Party Calling for Islamic State, Segregation
Bart De Wever, the N-VA leader, also raised his concerns and blamed the current situation on the previous government, which, according to him, wanted to reduce the influence of Christianity to a minimum.

Theo Francken, the State Secretary for Asylum and Migration, also denounced the Islam Party’s first proposals as a blow to democratic and European values.

"Women do not have rights in their Sharia world. And it starts with separate public transport. I am disgusted by This ISLAM party… This is spitting on Europe," Francken wrote on Twitter.

Andre Flahaut, the Minister for the Budget, the Civil Service and Administrative Simplification in the government of the French-speaking Community, on the contrary, earlier proposed adopting another approach to the Muslim population. He suggested introducing Arabic language lessons at schools in the community. According to him, it would be a sign of respect and another step toward successful co-existence.

There are concerns that the Islam Party’s political platform would appeal to religious people. Miller, in particular, even voiced concern that the party might demonstrate a good performance in the upcoming election, and other parties with similar ideas could be tempted to form an alliance with the party.

The majority of Belgian Muslims, however, do not share the ideas of the Islam Party, according to Isabelle Praile, a former vice president of the Muslim Executive of Belgium.

"These statements are not shared by the overwhelming majority of Muslims, and do not reflect the[ir] vision for women’s place in the political system," Praile said.

The exact number of Muslims in Belgium is unknown since the country does not collect or publish statistics on religious affiliation, with various sources estimating it at from 4.0 to 6.5 percent, and as much as 25 percent in Brussels.

000000
Popular comments
I think they should consider the Islamic Party as a gift fom their friends in the Western Empire (North-America & Western-Europe) due to their intermingling with Muslim Monarchies in Saudia Arabia & U.A.E who support Wahhabism /Salafism