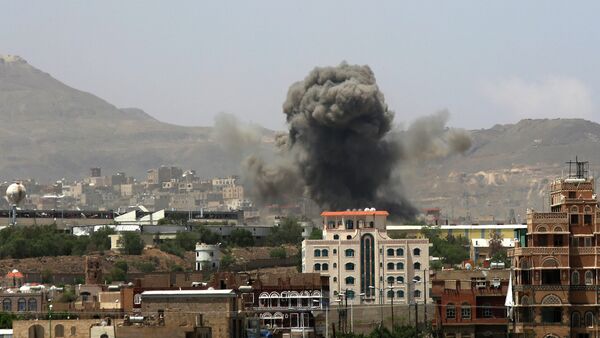 According to the Yemeni Arabic-language al-Masirah television network, citing an unnamed military official, the Yemeni Forces have launched a domestic-made ballistic missile at a military base in Saudi Arabia as a retaliatory measure to the Saudi-led campaign in Yemen.

The Saudi Nahouqa military base in the region of Narjan has reportedly been targeted by the short-range Zelzal-2 [Earthquake-2] missile; the Yemeni rocket has allegedly hit the facility with high precision. In addition, an unspecified number of Saudi soldiers have been killed and sustained injuries as a result of multiple artillery shells. The report further suggests that a military vehicle was also destroyed after the Yemeni forces hit it with missiles.

At the same, the forces have managed to fend off a separate attack on Yemen’s western coastline, having inflicted major losses to military personnel, hardware and vehicles of Saudi forces, al-Masirah reported.

Saudi Arabia has regularly been shelled from Yemen; last week, the Yemeni forces claimed a ballistic missile had successfully hit a Saudi military base near the border city of Jizan, with the Saudi-led coalition’s spokesman stating that the rocket had been intercepted.

Saudi Army Base in Asir Hit By Ballistic Missile From Yemen
Last month, the Saudi-led coalition reported it had intercepted and destroyed seven ballistic missiles, fired at Saudi Arabia from Yemen; three of them targeted Riyadh. Media reports suggested that the attacks killed one civilian and injured two others.

Yemen has been embroiled in a violent conflict between the government headed by President Abd Rabbuh Mansur Hadi and the Yemeni forces. Since 2015, the Saudi-led coalition has been carrying out airstrikes against the Yemeni forces at Hadi’s request. According to Yemeni Minister of Human Rights, an estimated 600,000 civilians have been killed or wounded since the beginning of the Saudi-led campaign.