Vanuatu Refutes Reports About Talks With China on Hosting Military Base 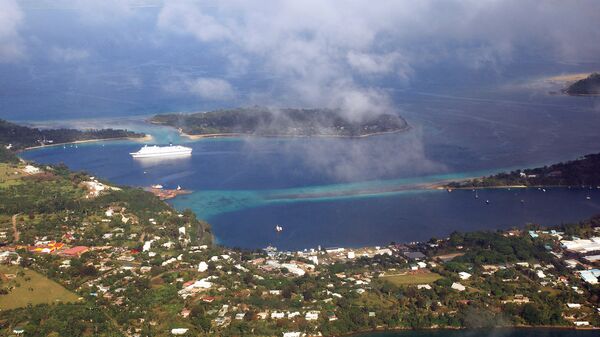 CC BY 2.0 / Phillip Capper / Port Vila
Subscribe
MOSCOW (Sputnik) - Vanuatu is not in talks with Beijing about hosting a Chinese military base on the territory of the Pacific island nation, Foreign Minister Ralph Regenvanu said on Tuesday.

The minister also expressed disappointment over the media coverage standards in Australia.

Commenting on the issue, a spokesman for the Chinese ambassador to Vanuatu said the reports were "ridiculous," while Chinese Foreign Ministry dubbed them as "fake news."

"This is fake news. The head of the Foreign Ministry of Vanuatu has already addressed this issue and explained it," spokesman Geng Shuang said, when asked about China's alleged plans for a base.

Earlier in the day, Australia’s Fairfax Media reported, citing unnamed sources, that the two states were engaged in high-level talks on hosting a Chinese military outpost on the territory of Vanuatu, thought there had been no formal proposal.

In August 2017, China opened its first overseas naval logistics center in Djibouti located in the Horn of Africa. The center is expected to be used by the Chinese patrol boats in the Gulf of Aden and other areas and serve as supplies center and a recreation facility for sailors, according to the Chinese Defense Ministry. China has been actively participating in anti-piracy measures in the region.