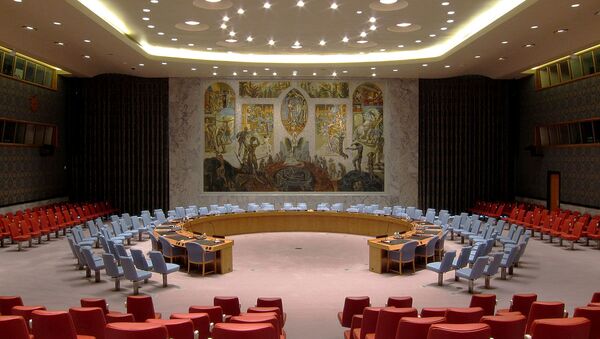 The meeting takes place just days after an alleged chemical weapons incident in Syria's Douma - Moscow and Damascus maintain it was a provocation and demand an investigation into the matter, while Washington pins the blame on the Syrian government, is considering a "forceful" response, and is amplifying its naval strike group in the Mediterranean.

Diplomats at the United Nations Security Council voted down both the US and Russian proposals for new mechanisms for investigating chemical weapon attacks, with Russia blocking the US proposal and Russia's proposal failing to secure enough votes.

All votes require a minimum of nine votes in favor to pass. If Russia, China, France, the United States, or the United Kingdom votes against a draft resolution, the measure is defeated without question.

"We will not be able to support the American draft," Russian envoy Vasily Nebenzya said ahead of the vote. The US proposal would allegedly determine culpability for chemical weapons attacks. Nebenzya noted that over the weekend, when Douma was allegedly targeted by chemical weapons, the US side declared it already knew who was at fault — "Animal Assad," Russia and Iran — so the US proposal appeared insincere. US President Donald Trump has already promised to respond to the alleged gas attack "forcefully."

"This resolution is the bare minimum that the council can do to respond to the attack," said Nikki Haley, the United States' ambassador to the United Nations.

Russia and Bolivia voted against the US proposal, while China abstained. Since Russia has veto power, the measure was not adopted.

"The draft resolution has not been adopted," said the Peruvian envoy following the first vote on the US-written resolution. Peru's diplomat is presiding over the council meeting.

Russia's draft resolution failed to attain the required number of votes. Six nations voted in favor, seven voted against, and there were two abstentions.

​UK envoy Karen Pierce said Moscow could always "suggest that we refer the matter to" the International Criminal Court. The UK voted against the Russian measure because it allows sovereign states to operate above the law, the UK diplomat said.

Following the failure of both the Russian and American proposals, Nebenzya stated that if the United States "took the decision to carry out an illegal military adventure — and I do hope you come to your senses — well, then you will have to bear responsibility for it yourselves."

The resolutions proposed today "are not about Douma, let's not mislead anyone about that," Nebenzya said, having noted that the US has already reached its conclusion on the matter without any investigation at all.

The council debated whether to vote on sending the OPCW to Douma, but investigators are already en route following a request made by the Syrian government to the group.