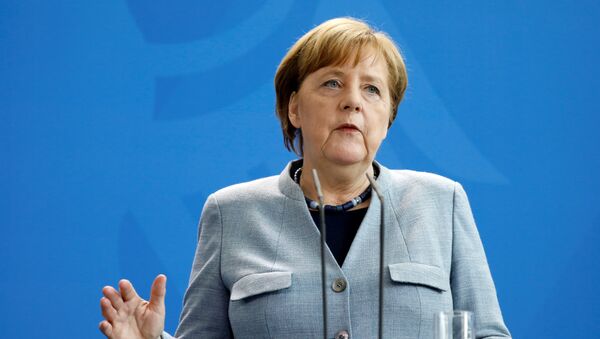 Evidence of the use of chemical weapons in Syria is “clear and explicit”, German Chancellor Angela Merkel said Tuesday.

"I believe that the evidence that chemical weapons were used there is very clear and very explicit. From my point of view, this can be verified again, but this cannot help us in assessing this case," Merkel said at a joint press conference with Ukrainian President Petro Poroshenko.

World
US Refuses to Face Reality in Alleged Syria Chemical Attack - Kremlin
On April 7, several Syrian opposition online media outlets reported, citing militants that the Syrian Army had used chlorine in the town of Douma and killed up to 70 people.

While speaking about the Nord Stream 2 gas pipeline, Merkel said that the project couldn't go ahead without clarity on Ukraine's role as a gas transit route.

"Right, and I said this yesterday in a phone conversation with Russian President [Vladimir Putin] that it is impossible if because of Nord Stream-2 Ukraine will lose its significance as a gas transit country… I clearly indicated that the Nord Stream-2 project is impossible without our clarity about the future role of Ukrainian transit, from our viewpoint," Merkel said.

"So you can see that it is not just an economic issue but there are also political considerations," she noted.