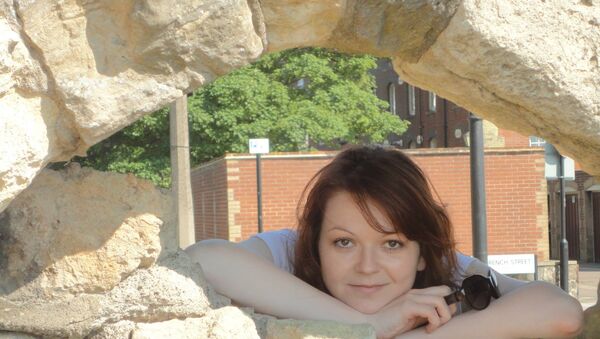 © Photo : Yulia Skripal/Facebook
Subscribe
The Russian Embassy in London has reacted to the report, Yulia Skripal, who was poisoned in England along with her father, had been discharged from the hospital.

Salisbury District Hospital medical director Christine Blanshard confirmed that Yulia had been discharged from the facility, adding that she hoped, her father Sergei would leave the hospital in due course as his health had been improving.

"Yulia has now been discharged from Salisbury District Hospital… This is not the end of her treatment, but marks a significant milestone. Her father [Sergei] has also made good progress. On Friday, I announced that he was no longer in a critical condition. Although he is recovering more slowly than Yulia, we hope that he too will be able to leave hospital in due course," Blanshard said in a statement.

Following the announcement, the Russian Embassy in London said on Twitter, it needed urgent confirmation that what was being done to Yulia was done on her own free will.

We congratulate Yulia Skripal on her recovery. Yet we need urgent proof that what is being done to her is done on her own free will.

Commenting on the issue, Russian Ambassador to the UK Alexander Yakovenko said that Russian diplomats in London had learned that Yulia had been discharged from a hospital from media reports, as there was no official notification.

“We have learned about it from mass media, there were no official notifications from the UK side,” Yakovenko said.

Earlier in the day, Sky News broadcaster reported that Yulia was due to be discharged on Monday.

At the same time, a spokesman for Salisbury District Hospital gave no update on the condition of Yulia in an interview to Sputnik.

"We will update on our website, when there’re developments we can update on," NHS England’s press office said at that time.

On March 4, former Russian officer Sergei Skripal and his daughter Yulia were found unconscious in the UK city of Salisbury. The United Kingdom believes the two were exposed to the A234 nerve agent, related to the Novichok-class nerve agents developed in the Soviet Union.

Soon after the incident, the United Kingdom announced the expulsion of 23 Russian diplomatic workers. Over 25 countries have since expelled Russian diplomats "in solidarity" with London. Moscow has denied any allegations on the matter, pointing to the lack of evidence provided by London to substantiate its accusations.

000000
Popular comments
I fear that Julia can't go back to her normal life in Moscow. She will be forced to live unknown somewhere with a new identity for the purpose that she can't tell the true story.
kooka
10 April 2018, 10:28 GMT6
000000
I hope she gets to return safely to Russia and wish her and her father the best
brwnxpng
10 April 2018, 10:30 GMT3
000000
Newsfeed
0
New firstOld first
loader
LIVE
Заголовок открываемого материала
Access to the chat has been blocked for violating the rules . You will be able to participate again through:∞. If you do not agree with the blocking, please use the feedback form
The discussion is closed. You can participate in the discussion within 24 hours after the publication of the article.
To participate in the discussion
log in or register
loader
Chats
Заголовок открываемого материала
Worldwide
InternationalEnglishEnglishMundoEspañolSpanish
Europe
DeutschlandDeutschGermanFranceFrançaisFrenchΕλλάδαΕλληνικάGreekItaliaItalianoItalianČeská republikaČeštinaCzechPolskaPolskiPolishСрбиjаСрпскиSerbianLatvijaLatviešuLatvianLietuvaLietuviųLithuanianMoldovaMoldoveneascăMoldavianБеларусьБеларускiBelarusian
Transcaucasia
ԱրմենիաՀայերենArmenianАҧсныАҧсышәалаAbkhazХуссар ИрыстонИронауОssetianსაქართველოქართულიGeorgianAzərbaycanАzərbaycancaAzerbaijani
Middle East
Sputnik عربيArabicArabicTürkiyeTürkçeTurkishSputnik ایرانPersianPersianSputnik افغانستانDariDari
Central Asia
ҚазақстанҚазақ тіліKazakhКыргызстанКыргызчаKyrgyzOʻzbekistonЎзбекчаUzbekТоҷикистонТоҷикӣTajik
East & Southeast Asia
Việt NamTiếng ViệtVietnamese日本日本語Japanese俄罗斯卫星通讯社中文（简体）Chinese (simplified)俄罗斯卫星通讯社中文（繁体）Chinese (traditional)
South America
BrasilPortuguêsPortuguese
NewsfeedBreaking
02:55 GMT911 Call Reveals Boyfriend Was Seen 'Slapping' Petito Two Weeks Before Her Disappearance - Report
02:31 GMTBiden Reaffirms Strong US-UN Partnership at Meeting With Guterres
02:22 GMTIndia Cuts Off Communications, Internet in Kashmir Due to Terrorists, Reports Say
02:12 GMTMember of CIA Chief’s Team Affected by ‘Havana Syndrome’ During Work Trip to India, Report Says
01:22 GMTClimate Change-Driven Cyclones Could be Regular Sights in Europe in 30-50 Years, Meteorologist Warns
01:02 GMT‘License to Murder Children?’ Psaki Panned for Bringing Up Biden’s Losses in Kabul Strike Answer
00:38 GMTMilley Told Admiral to Halt Operations in Pacific That China Could Deem 'Provocative', Authors Claim
00:11 GMTPremier League Goals of the Weekend
YesterdayMali Looks for ‘Plan B’ to ‘Bolster Our National Defense’ As French Mission Exits, Leaving Chaos
YesterdayGlobal Pandemic Caused Significant Surge in Demand For Black Bridal Dressers, Fashion Experts Say
YesterdayCoronavirus Death Toll Surpasses 1918 Influenza to Become Deadliest Pandemic in US History
YesterdayIran's New Defense Minister Says Enemies Will Get 'Crushing Response' - Report
YesterdayBorrell Expresses Regrets That EU Countries Were Not Invited to Join AUKUS
Yesterday‘Go Back to Mexico’: Shocking Video of US Border Patrol on Horseback Seen Whipping Haitian Refugees
YesterdayCDC Recommends Admitting Afghan Refugees 21 Days After Measles Vaccine, Reports Say
Yesterday26 GOP Governors Demand Meeting With Biden Amid Deepening Frustration Over Border Crisis
YesterdayDiscovery of Bats With Close Sars-CoV-2 Relative Add More Evidence to Natural Origins of COVID-19
YesterdayFull Harvest Moon Lights Up Sky Over Buenos Aires
Yesterday‘I Got Chills’: Travel Blogger Finds Video of Gaby Petito’s Van
YesterdayTexas Governor Asks Biden to Declare Federal Emergency in Response to Border Crisis