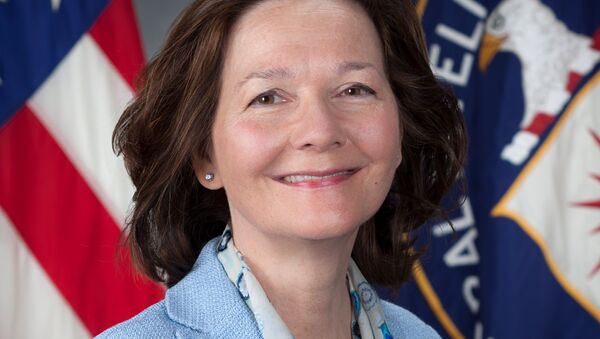 © REUTERS / CIA/Handout
Subscribe
The nominee to be the new head of the CIA, Gina Haspel, has received support from senior intel officials who served in both Republican and Democratic administrations. Her nomination is shrouded in controversy over her role in human rights abuses during the CIA’s torture program, and there are doubts whether the Senate will confirm the appointment.

The controversial nominee to be the new head of the CIA, Gina Haspel, has received support from senior intelligence officials who served in both Republican and Democratic administrations. A letter signed by over 50 intelligence veterans, including six former CIA directors and three ex-directors of national intelligence, lauded Haspel and supported her nomination to lead the US spy agency.

Among those who signed the April 9 letter are formers heads of the CIA during the Obama administration John Brennan, Leon Panetta and Michael Morrell; former DNI for the Obama administration James Clapper; former director of the CIA’s Counterterrorism Center Cofer Black; former director of the CIA and the FBI William Webster; and former Secretary of State Henry Kissinger. The letter says:

“Those who have served alongside Ms. Haspel have only the utmost praise and respect for her. She has broad support from the CIA workforce. Within the U.S. national security community and among our allies around the globe, admiration for her is unsurpassed. It is truly telling that a broad spectrum of national security leaders from both Republican and Democratic administrations has voiced unequivocal support for her nomination.”

Despite the letter’s claim of ‘unequivocal support’ for Haspel, opposition to her nomination is widespread. Republican senator Rand Paul is already opposed to her name going forward, and at least three other Republicans are thought to be undecided. This leaves the Republicans looking to Democratic support for Haspel to be confirmed by the Senate.

Recently, over two dozen former intelligence officials, including respected whistleblowers, signed an open letter urging president Trump to withdraw Haspel’s nomination, citing her integral involvement in the CIA’s torture program. In particular, the Veteran Intelligence Professionals for Sanity (VIPS) letter highlighted Haspel’s role in destroying videotapes of interrogations including torture. This has led to claims that she was covering up major crimes and “loathsome physical abuses”.

Opposition Grows to CIA Nominee Haspel Ahead of Confirmation Battle
The April 9 letter to the Senate Intelligence Committee is likely a response to the VIPS letter, but opposition to Haspel reaches beyond the US intelligence community. Civil liberties, human rights, and liberal groups are pushing for senators to reject Haspel, largely due to her role in both the torture program and the destruction of the torture tapes. Among those who signed the April 9 letter in support of her nomination is Jose Rodriguez, the former head of the CIA’s National Clandestine Service, who told Haspel to draft the cable ordering the destruction of the tapes.

Trump nominated Haspel, who is currently CIA deputy director, to be director last month. If confirmed, she would be the first woman to lead the agency on a permanent basis.

000000
Popular comments
What a mad way to take Trumpton down.
Aramis
10 April 2018, 19:45 GMT
000000
"...... admiration for her is unsurpassed." Even above the torture chiefs of Pinochet and the other South American 'caudillos'? Wow ! And then there would be the successive, tenured professors of the Faculty of Torture and Allied Methods of Persuasion (or some such....) at the School of the Americas. And what a star she'd have been at Abu Ghraib ! Oh my ! What a national-security treasure.
pbecke
23 April 2018, 18:35 GMT
000000
Newsfeed
0
New firstOld first
loader
LIVE
Заголовок открываемого материала
Access to the chat has been blocked for violating the rules . You will be able to participate again through:∞. If you do not agree with the blocking, please use the feedback form
The discussion is closed. You can participate in the discussion within 24 hours after the publication of the article.
To participate in the discussion
log in or register
loader
Chats
Заголовок открываемого материала
Worldwide
InternationalEnglishEnglishMundoEspañolSpanish
Europe
DeutschlandDeutschGermanFranceFrançaisFrenchΕλλάδαΕλληνικάGreekItaliaItalianoItalianČeská republikaČeštinaCzechPolskaPolskiPolishСрбиjаСрпскиSerbianLatvijaLatviešuLatvianLietuvaLietuviųLithuanianMoldovaMoldoveneascăMoldavianБеларусьБеларускiBelarusian
Transcaucasia
ԱրմենիաՀայերենArmenianАҧсныАҧсышәалаAbkhazХуссар ИрыстонИронауОssetianსაქართველოქართულიGeorgianAzərbaycanАzərbaycancaAzerbaijani
Middle East
Sputnik عربيArabicArabicTürkiyeTürkçeTurkishSputnik ایرانPersianPersianSputnik افغانستانDariDari
Central Asia
ҚазақстанҚазақ тіліKazakhКыргызстанКыргызчаKyrgyzOʻzbekistonЎзбекчаUzbekТоҷикистонТоҷикӣTajik
East & Southeast Asia
Việt NamTiếng ViệtVietnamese日本日本語Japanese中国中文Chinese
South America
BrasilPortuguêsPortuguese
NewsfeedBreaking
19:01 GMTPiers Morgan Compares Joe Biden to Kim Jong-un in Column Bashing White House's Approach to Media
18:59 GMTPhotos of Ghislaine Maxwell Rubbing Jeffrey Epstein's Feet, Kissing Him Released by US Prosecutors
18:48 GMTJapanese F-35A Makes Emergency Landing During Routine Training Flight - Video
18:23 GMTPutin: Sanctions Under Pretext of US Security Attempt to Contain Russia's Development
18:03 GMTTucker Carlson Warns of Danger of ‘Hot War’ Between US and Russia Over Ukraine
18:02 GMTTrudeau: Canada Will Not Send Diplomatic Representation to China Olympics
17:56 GMT'A Verbal Agreement With Premier League Club? All False': Mancini Dismisses Man United Job Links
17:48 GMTBiden’s Empty Warning Over Putin’s Straw Man ‘Invasion’
17:42 GMTUS Reportedly Becomes Major Destination for UK's Post-Brexit Financial Services Exports
17:41 GMTIndia’s Congress Unveils 'Manifesto for Women' to Woo Voters in Uttar Pradesh
17:31 GMTInitial Sketch Found Beneath Rembrandt's 'Night Watch' - Photo
17:22 GMTIMF: Metals Demand From Clean-Energy Transition Threaten to Top Global Supply
17:16 GMTElon Musk Brands CEO 'Made Up Title,' Explains Why He Became Tesla's 'Technoking'
17:13 GMTIndian Farmers Agree to Call Off Year-Long Protest after Government Promises to Meet Demands
17:03 GMTUS Jobs Quitting Rate in October Down From Record Highs, Labour Department Says
16:40 GMTUS Targets Individuals in Kosovo, El Salvador, Serbia in New Global Magnitsky Sanctions
16:17 GMTBiden Announces Plans for NATO-Russia Meeting to Discuss Moscow's Concerns
16:03 GMTUK Government Spox Stratton Resigns Over No.10 Lockdown Christmas Party Video
15:44 GMTSeven UN Peacekeepers Killed in Explosion in Mali
15:32 GMTOpening Statements: Trial of Ex-Cop Kim Potter Who Killed Black Man Daunte Wright