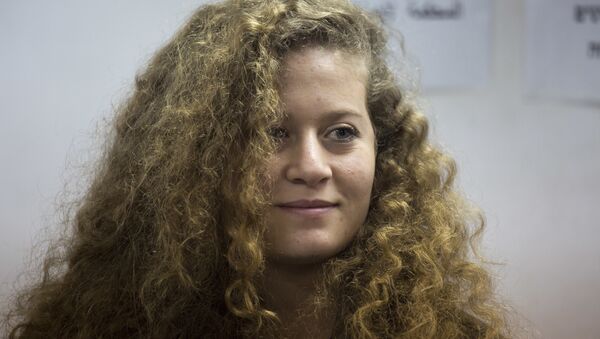 Ahed Tamimi was jailed after she infamously attacked two Israeli soldiers who had reportedly shot her cousin in the face with a rubber bullet. The confrontation was recorded on video and, after publication, went viral, igniting a wave of blistering discussions.

The parents of Ahed Tamimi, a Palestinian teen who slapped and kicked two fully armed Israeli soldiers, have released a video of Ahed being interrogated in an Israeli prison.

Ahed was jailed two weeks after the incident. Her parents claim that she has been repeatedly abused, both physically and verbally, while in custody.

"The rounds of interrogation came after various methods of physical and psychological pressures put on her," said her father, Bassem, during a press conference in the West Bank city of Ramallah on Monday, adding that his daughter had been kept in isolation and regularly moved between locations, according to Press TV.

"She was deprived of sleep for long periods of time. In the final round of interrogations it was more than 34 hours without sleep," he added.

Excerpts from the 90-minute interrogation video, viewed in full by The Associated Press, were released Monday by Tamimi's father, according to Haaretz.

In the video, Ahed, aged 16 at the time, is seen, without an attorney or guardian, being questioned by two Israeli interrogators.

"This is to reiterate Ahed's message, the message of her generation, that we are not victims, we are fighters for the cause, for freedom," her father added, Press TV reports.

Last month, Tamimi agreed to a plea deal, under which she will serve 8 months in prison and pay a 5,000-shekel ($1,437) fine. Thanks to the deal, she has avoided lengthy imprisonment. Ahed is expected to be released this summer.