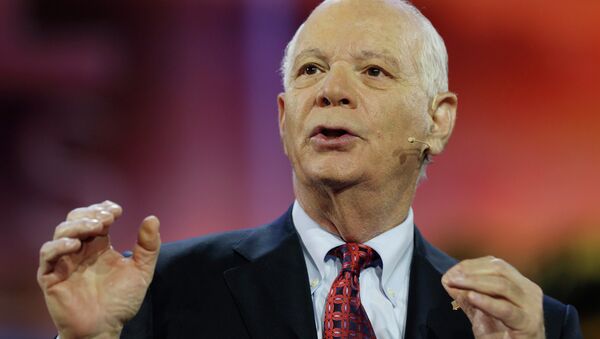 Senator Ben Cardin, a Democrat from the state of Maryland, has called on additional sanctions against Russia and Iran in connection with accusations of an alleged chemical attack on the town of Douma in Syria's Eastern Ghouta.

Cardin, who serves on the US Senate Foreign Relations Committee, told CBS's Face the Nation weekly news show on Sunday that he was pleased with US President Donald Trump's accusation of Russian President Vladimir Putin, Moscow and Tehran in backing Syrian President Bashar Assad, in light of claims about the alleged use of chemical weapons in the Arab republic.

"The Syrian regime under President Assad cannot exist without Russia's support and the activities of Iran," the senator asserted.

"The United States, the international community, need to take action against Russia and Iran for what they're doing in Syria […] we need to take a pretty strong response for another use of chemical weapons," he urged.

Cardin admitted, however, that it would be "challenging" for the US to determine who is responsible for the purported attack, as "the Syrian regime has closed the area. So we were not going to have the direct information."

PHOTOS Allegedly Show US-Coalition Convoy Heading From Iraq to Syria
Earlier, several media outlets reported citing Syrian militants that the country's army had allegedly used chlorine gas in the city of Douma. In turn, Syria's SANA news agency quoted Syrian officials that the allegations were a simple provocation by the Jaysh al-Islam militant group and other mercenary fighters as a means to hinder the advance of the army of the Syrian government.

Iran's Foreign Ministry announced according to local media that reports of a gas attack in Syria were not based on fact and were an "excuse" by the Washington and Western countries to take military action against Damascus.

Damascus' stance has been supported by Moscow and Tehran, with the Russian Reconciliation Center for Syria saying on Sunday that no chemical weapons have been used in the vicinity and that all accusations against the Syrian government troops regarding the alleged use of chemical weapons are fake.

"No chemical weapons were used in this area, and all accusations against the government troops from the West are nothing more than another fake," the center's commander, Maj. Gen. Yuri Yevtushenko, said during his daily briefing.

Last month, Damascus warned that several foreign experts were preparing to stage a chemical attack carried out with the help of the infamous White Helmets, and that the attack would be covered by mainstream western media. A similar warning was issued in January by the Russian Reconciliation Center for Syria.