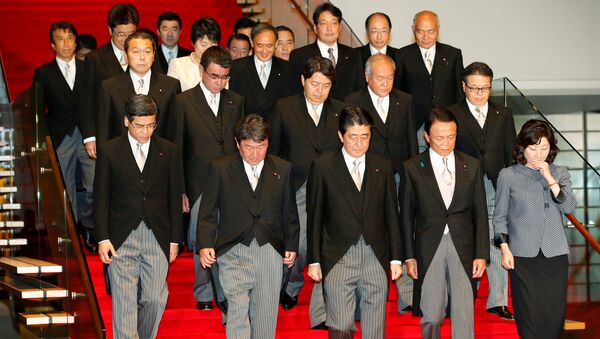 © REUTERS / Kim Kyung-hoon
Subscribe
TOKYO (Sputnik) – The level of support for Japanese Prime Minister Shinzo Abe’s cabinet has dropped by 6 percent to 38 percent since March, falling lower than the disapproval rate for the first time in six months amid scandals around the government, a fresh survey by NHK broadcaster showed.

The number of Japanese disapproving the government’s work has risen by 7 percent to 45 percent at the same time.

Out of the 38 percent that supports Abe’s cabinet, 18 percent said they approved of the government’s ability to implement policies, the results showed.

Forty-six percent of those who disapprove the cabinet’s policies cited the lack of their trust in Abe.

Japan’s PM Abe on Defensive Amid Corruption Allegations
The government approval rating fell amid the scandal revolving around Abe, his wife and Finance Minister Taro Aso and their alleged involvement in providing a discount to a school operator for purchasing publicly-owned land for school construction.

Earlier in the day, the Japanese finance ministry admitted it had tried to convince the school operator Moritomo Gakuen to create a cover-up story regarding the way it had purchased the land at a discount.

The pollster noted, that 35 percent of Japanese said they wanted Aso’s resignation over the scandal, while 25 percent said they did not want the finance minister to step down, and 32 percent were undecided.

Abe’s government has also been at the center of the scandal over the disclosure of activity logs of Japanese troops in Iraq between 2003 and 2009, the existence of which had been earlier denied by the Japanese Defense Ministry.

The survey was conducted on Saturday and Sunday among over 1,200 Japanese nationals.