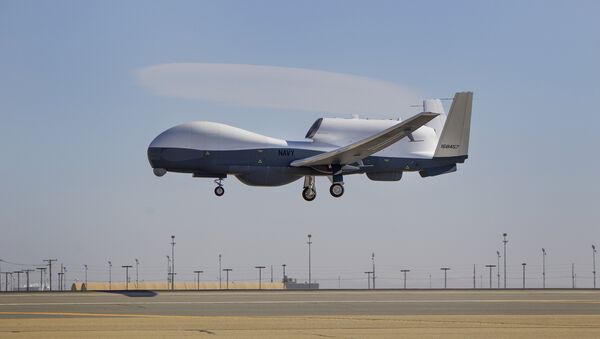 Sputnik: The sale of drones to Germany is aimed to protect the nation from regional threats. What threats are we talking about here and is Germany's security compromised by any regional actor do you think?

Medea Benjamin: No, I mean Germany's talking about needing these drones to protect its own troops that are fighting ISIS, which is so strange because the fight against ISIS* [Daesh] is supposedly winding down. I don't think there is any need that Germany has to have these armed drones and in fact this is something that the German people have been fighting against for a long time, they've seen the use of armed drones by the United States killing lots of civilians and there is quite a large movement against this inside Germany.

Sputnik: So what is this militarization really about what then and why does Germany need those drones now, if what you're saying is the truth?

Medea Benjamin: Well within the military establishment in Germany, in the more conservative parties, there's been an effort, it's been now five years that this debate is  going on, the Germans want to have the latest technology that eleven other countries around the world have and it's really just part of keeping up with the neighbors. It certainly does not need these in terms of its own national security, but it shows that the more conservative elements in Germany have now gotten the upper hand in terms of this technology.

Sputnik: How disturbing, therefore, do you find Germany's possession of drones capable of carrying arms in their arsenal? It's very disturbing generally, the drone capability as a killing machine, we should be withholding the sale of this equipment surely, rather than trying to increase its manufacture and selling these items. They could get into all sorts of hands with the possibility now of copying things, what's your take on it?

'Two Agendas' Behind US Drone Sales to Germany Exposed by Analyst
Medea Benjamin: Well yes, this is a business the United States, Israel and China are the top three countries in terms of the sale of drones, they have lobby groups, and here in the United States they push very hard to be able to sell their weapons overseas. In fact, it was very interesting that the US company called General Dynamics sued Germany to say no, you shouldn't be leasing these Israeli drones, you should be buying these US drones; they lost that case, but it demonstrates how this is business and it's not good for the security of the planet. The United States is the one that's been most involved in using drones and look at the history of the United States with thousands and thousands of innocent people from Pakistan, to Yemen, to Somalia, to Afghanistan being killed by US unmanned drones.

Sputnik: Germany's previous Euro Hawk drone program was cancelled due to immense cost thing, how different is the situation now with these UAV's (unmanned aerial vehicle)? It doesn't make sense, really, having the program cancelled before. Is it the geopolitical elitism culture that we're living in, taking over again?

Medea Benjamin: Well the Euro Hawk program was a disaster with tremendous cost overruns and a bad plane as a result. Now they're taking the tried and true, the Israeli version and just leasing because they want to come up with their own version in the coming decades, so it's just an example of this global military industrial complex run amuck and unfortunately Germany wants to be part of the global community that has succumbed to the use of drones that keep their own pilots a hundred per cent safe, off in military air bases thousands of miles away while they're able to kill, many times, innocent people in countries far away.

Sputnik: I have to ask about the situation that we've been reporting on today about the chemical bomb being dropped in Syria and again this explosion of geopolitical innuendo regarding the current situation. It's very tense, it's very nervous and lots of experts have been talking about this build up happening over a period of three months, what's your take on it? Are you concerned about this explosion of this geopolitical agenda and now these unconfirmed reports of this chemical bomb being dropped, what's your take on this?

German MoD to Request Approval for Armed Combat Drone Program
Medea Benjamin: I'm extremely concerned, living in the United States it feels like we're in the 1950s again with the Cold War: anything Russian is considered terrible. I have a friend who's just brought over a group of Russian women to be doing the kind of people the people ties that we used to do decades ago and she just told me that they can't get meetings in Washington DC with elected officials, particularly with members of Congress, because they're afraid of meeting with Russians and what that would do to their reputation. It's a really crazy times and I think this relates very much to our topic, to the military-industrial complex, because I think there are many weapons manufacturers who say "Why are we still piddling around with these small enemies like the jihadists? We need a real enemy like Russia or China to make a lot of money from the weapons industry," and there we are and it's certainly a very dangerous moment.

Sputnik: What can we do as a global audience, we're very tense, we're very worried, we're being driven towards conflict by the politicization of an administration that is trying to look after an elitist ideology, we are run by these elitist powerhouses. What can the general audience within the world do about this?

Russian Emergencies Ministry to Buy 600 Drones for Firefighters in 3 Years
Medea Benjamin: Well, yes, I know here in the United States we used to have a very large peace movement that has really fallen apart, we're trying to rebuild that now, we feel we have to invigorate the population to understand how much of our taxpayer money here in the United States is going to support this bloated Pentagon and the conflicts that we've been in ever since the time of 9/11; so I think there's general education of the public, people to people ties, we've been doing that with everyone from our women's group that's across the "demilitarized zone" between North Korea and South Korea, that goes to Iran to humanize the people there, and we certainly now have to humanize the Russian people and show that they are not our enemies.

000000
Popular comments
You cannot have more dirty and corruption than those German politicians that in order to gain "cuts" of drone (or something else ) contracts/sales ( paid by the German tax payers) come with any absurd motive/pretext to approve the buying of weapon that nobody will use. The pretext of buying drones to defend German soldiers is just ridiculous. However, this the legal way to spend people money (steal) by buying this time drones. Two years ago, the UK government paid to the USA more than 30 billions pounds to buy drones to be used overseas while UK plain people can not get proper medical care because there is not money.