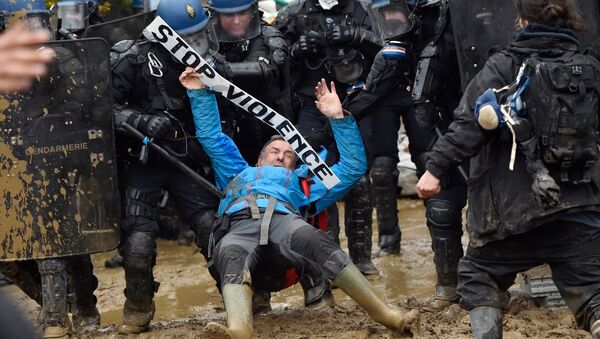 MOSCOW (Sputnik) - The French police have used tear gas against activists during the evacuation of a camp of squatters in the French western commune of Notre-Dame-des-Landes, the BFMTV broadcaster reported.

The evacuation of the camp, inhabited by the opponents of a plan to build an airport in the commune for over a decade, began at about 6:00 a.m. local time (04:00 GMT). Even despite the fact that the project was officially abandoned by the French authorities earlier this year, the squatters continued to occupy the site of the planned airport construction, according to the BFMTV broadcaster.

"This morning at 6 a.m. [the French National] Gendarmerie will begin an operation to expel the illegal occupants of Notre-Dame-des-Landes. In accordance with the announcement of the [French] prime minister [Edouard Philippe] of January 17, it will aim to put an end to the illegal zone," French Interior Minister Gerard Collomb announced the start of the operation in a tweet.

About 2,500 police officers are taking part in the operation to expel approximately 250 squatters, the broadcaster reported, adding that operation will last for several days.

READ MORE: France vs Italy in Border Row: Refugees 'Come and Go to Return Next Day'

In 1967, Notre-Dame-des-Landes was designated as a site for a future airport hub, however, the project had long been stalled before being revived in the 2000s. Since 2008 the site has been squatted by anti-capitalists, eco-activists, and anarchists, who were against the construction of the airport worth approximately 580 million euro ($713.9 million).

On January 17, French Prime Minister Edouard Philippe stated that the airport construction project would be abandoned, while the squatters camp will be dismantled.