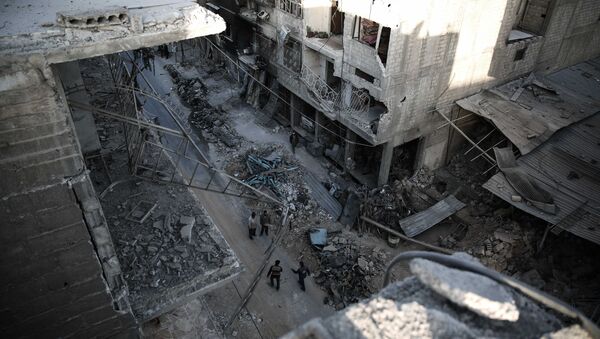 John Wight
All materials
Either the chemical weapons attack in Douma is nonsense, or Bashar al-Assad is the stupidest man on the planet. Why? Simply because the potential consequences attached to Syrian military forces carrying out such an attack at any point in the conflict, but especially this point, would be so catastrophic.

By now the pattern of these alleged chemical weapons attacks is set in stone. They come at seminal junctures in the conflict, when Syrian government forces are on the verge of a significant strategic victory or advance against the alphabet soup of Salafi-jihadi groups that are operating in the country.

Thus the Ghouta attack of 2013 occurred just as UN inspectors arrived in Damascus to investigate claims that Nusra Front were using chemical weapons, and at a point when the Syrian Arab Army and Hezbollah were winning key battles — al-Qusayr, Aleppo, Ghouta — with the momentum on the ground shifting in favour of Damascus.

Douma Medics Received No Patients With Signs of Chemical Poisoning - Russian MoD
The alleged chemical attack by Syrian forces in Idlib in 2017, which led to Trump's decision to launch a cruise missile strike against the government's Shayrat Airbase in Homs, came just after Trump had announced that regime change in Damascus was now off the table as a US strategic objective.

The Douma attack, likewise, has come at a critical juncture, just as the military operation to liberate the entire district of eastern Ghouta from opposition militant groups, dominated by Jaish al-Islam, approaches completion.

Call me old-fashioned, but purely on the level of motive the pattern of these attacks constitutes by itself grounds for circumspection, if not scepticism?

Yet again, as with previous attacks, the evidence and information surrounding the Douma attack has been provided by opposition and pro-opposition groups, such as the White Helmets and the Syrian Observatory for Human Rights.

Though no one is suggesting (at least certainly not me) that no attack took place, or that the footage of children stricken in the aftermath was fabricated, until independent verification is forthcoming the claim of Syrian army culpability cannot be taken at face value — not when we are dealing with probably the most heavily propagandized conflict of modern times, wherein the information war has been elevated beyond the status of an adjunct to the conflict on the ground to the point where it is now a key and crucial front in of itself.

Lavrov on Likely US Strike on Syria: Moscow Has Commitments Towards Damascus
The clamour for Western military intervention follows these alleged attacks is deafening, whipped up by the usual complement of neocon ideologues and regime change fanatics for whom every day is a cruise missile day. Meanwhile, Trump's threat that Syrian President Bashar al-Assad would pay a "big price" is redolent of the posse-speak that has come to exemplify his administration's engagement with a world that has long been straining under the weight of US hegemony.

Indeed for neoconservative hawks such as Trump's newly appointed National Security Advisor, John Bolton, the world is America and America is the world, with those who dare resist ripe for attack.

Conveniently abstracted from the wholesale demonization of Assad, Putin, Russia and Iran — the forces fighting to liberate Syria from the kind of people who when conducting attacks on civilians in London, Paris, Brussels, and San Bernadino are described as terrorists, but when it comes to Syria are described as rebels — is the fact that groups such as Nusra and Jaysh al-Islam have access to chemical weapons. The US State Department admitted as much in a travel warning posted on its website (though later removed), according to reports towards the end of 2017.

Trump Slams Putin, Iran for Backing "Animal Assad" Amid Chemical Attack Claims
Even more significantly, when it comes to the Douma attack, is the revelation that Syrian army units stumbled upon makeshift labs for the production of chemical weapons during the current campaign to liberate Ghouta. Then, too, we have the warning issued by Russia in mid-March that the US was planning a strike on Damascus on the basis of an "invented pretext." The Russian warning, carried by Reuters, sources a statement made by the head of staff of the Russian armed forces, Valery Grasimov, claiming that Russian military intelligence had received information that militants in Ghouta were planning to fake a chemical weapons attack against civilians and blame it on the Syrian army.

Now, a month later, we have the Douma chemical weapons attack, followed by an Israeli airstrike on a Syrian military facility in Homs, confirming yet again that Israel under Netanyahu is a rogue state, unbound by any legal or moral constraint.

"Scratch any cynic and you will find a disappointed idealist," legendary US comedian George Carlin once opined, proving that oft-times the most profound wisdom is articulated in jest. In admitting to having lost any faith in the moral rectitude of Western governments in matters of war and peace, I don't think that I am alone. How could it be otherwise when the evidence of their malign actions is so overwhelming? For more and more people in the West, a million dead Iraqis and countless dead Libyan verily scream at them from the grave every time they come close to consider taking their governments' claims at face value when it comes to the pretext presented to them for still more military intervention in more countries.

Don't get me wrong: it has not yet reached the stage where I refuse to believe a word they say about anything. But let's just say that if they tell me it's going to be warm and sunny tomorrow, I'll be sure to pack my umbrella and stick on my overcoat before leaving the house.