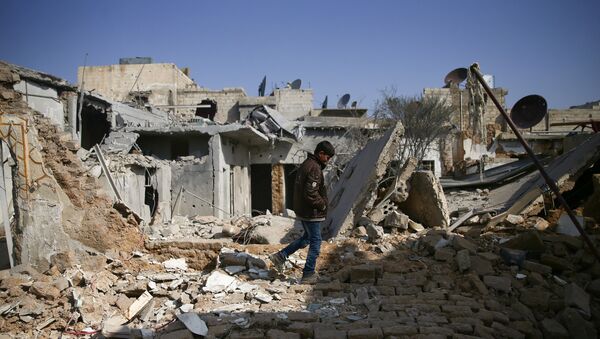 © REUTERS / Bassam Khabieh
Subscribe
International
India
Africa
While NATO states have blamed the Syrian army for the alleged use of chemical weapons in Eastern Ghouta, Russia and Iran have slammed the unproven claims and warned against carrying out military action against the Arab Republic's authorities.

Damascus has slammed the allegations of an alleged chemical attack in Douma, Eastern Ghouta, as an "unconvincing broken record."

"Allegations of chemical use have become an unconvincing broken record, except for some countries that trade with the blood of civilians and support terrorism in Syria. Every time the Syrian Arab Army advances in the fight against terrorism, allegations of chemical use are used as an excuse to prolong the life of terrorists in Douma," state news agency SANA quoted a ministry source as saying.

Trump Slams Putin, Iran for Backing "Animal Assad" Amid Chemical Attack Claims
Damascus' stance has been supported by Russia and Iran, who rejected media reports about the Syrian Armed Forces’ having dropped a chlorine-filled bomb on Douma. The Russian reconciliation center for Syria said it was ready to send its specialists to the scene so that they could collect the evidence to prove the fabricated nature of the reports.

Allegations that Damascus has used chemical weapons in Douma appear every time the Syrian army has succeeded in the fight against militants, the ministry source stated.

Iran's Foreign Ministry announced that reports of a gas attack in Syria were not based on facts and were an "an excuse" by the US and Western countries to take military action against Damascus, the official Iranian news agency IRNA reported.

"Such claims and allegations by the Americans and some Western countries point to a new plot against the Syrian government and people, and are an excuse to take military action against them," IRNA reported foreign ministry spokesman Bahram Qasemi as saying.

Earlier, several media outlets reported, citing Syrian militants, that the country's army had allegedly used chlorine gas in the city of Douma, killing up to 70 people and injuring hundreds of others. In turn, Syria's SANA news agency reported quoting Syrian officials that these allegations were merely a provocation by Jaysh al-Islam group and other militants to hinder the advance of the Syrian government's army.

Johnson Calls for Urgent Probe Into Reports on Alleged Chemical Attack in Syria
Last month, Damascus warned that several foreign experts were preparing to stage a chemical attack, which would be carried out with the help of the infamous White Helmets and would be covered by mainstream media. The same warning was issued by the Russian Center for Syria reconciliation in January.

Meanwhile, US President Donald Trump has accused Moscow and Tehran of backing Syrian President Bashar Assad in light of the reports about the alleged use of chemical weapons in the Arab Republic, adding that Damascus would pay a "big price."

The stance has been supported by several EU members and US' NATO ally Turkey, who have also blamed the Syrian authorities for an alleged chemical attack, which has yet to be probed by international experts.

The Russian Defense Ministry commented on the situation stating that the major aim of the US is to accuse the Syrian government forces of using chemical weapons and justify possible military intervention in Syria from abroad.