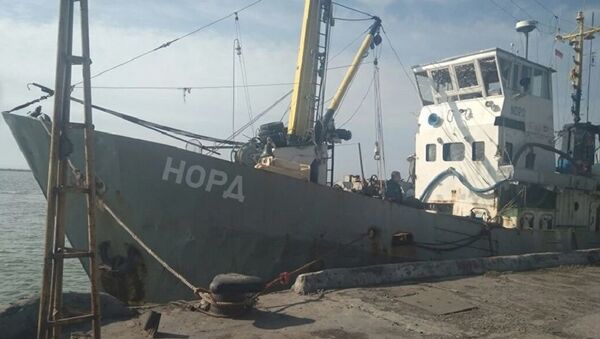 SIMFEROPOL (Russia)(Sputnik) - Ukrainian border guards did not allow the crew of the crew of the Russian-flagged fishing vessel Nord to leave Ukraine, the lawyer for Nord’s sailors told Sputnik on Sunday.

"The border service made the crew get out of cars, then they prepared protocols over [the Russian sailors] an attempt to illegally cross the border, and returned [them] to the territory of Ukraine," Vladimir Voytyuk said.

He added that the crew would stay in Kharkiv, and next week, they were expected to be summoned to court.

READ MORE: Israel Says It Has Foiled a Palestinian Militant Attack on Its Navy Vessel

Chinese Netizens Call for Return of Stolen Ancient Vessel Set for Auction in UK
Earlier in the day, the sailors were blocked at Hoptivka border post in Ukraine’s Kharkiv region.

On March 25, the Crimea-registered vessel Nord with its 10-man crew was detained in the Sea of Azov. Moscow has demanded the immediate release of the "illegally detained" crew and the return of the vessel to its legitimate owner.

On April 6, the crew members were fined, however, a Ukrainian court authorized the arrest of the captain with the possibility of bail.