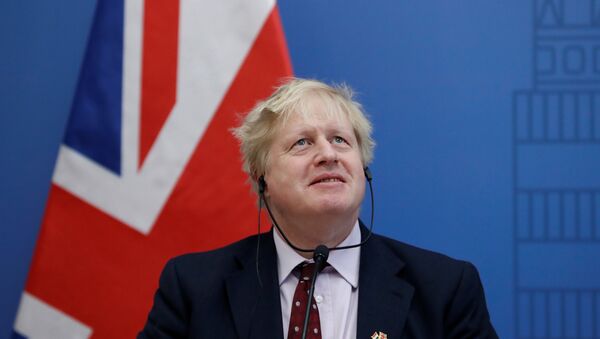 © AP Photo / Bernadett Szabo
Subscribe
International
India
Africa
LONDON (Sputnik) - UK Foreign Secretary Boris Johnson called on Sunday for an urgent investigation into the media reports about the use of chemical weapons by the Syrian government forces in the city of Duma, which allegedly claimed lives of dozens of people.

On Saturday, several media outlets reported, citing Syrian militants, that the country's army had used chlorine in the city of Duma, killing up to 70 people and injuring hundreds of others. In turn, Syria’s SANA news agency reported quoting Syrian officials that these allegations were merely a provocation by Jaysh al-Islam group and other militants to hinder the advance of the Syrian government’s army.

"These latest reports must urgently be investigated and the international community must respond. Investigators from the Organisation for the Prohibition of Chemical Weapons looking into reports of chemical weapons use in Syria have our full support. Russia must not yet again try to obstruct these investigations," Johnson said as quoted in the Foreign Office's press release.

Johnson stated that in the event the chemical attack confirmed it would be another example of the Syrian government's "brutality."

Russian MoD Accuses West of Curbing Syrian Army's Op Amid Chemical Attack Claims
Earlier in the day, the Russian reconciliation center for Syria categorically refuted media reports about the Syrian armed forces' having dropped a chlorine-filled bomb on Duma. The center said it was ready to send its specialists to the scene so that they could collect the evidence proving the fabricated nature of the reports.

The Russian Foreign Ministry, in turn, stated that such information attacks aimed to cover up terrorists and justify possible external military intervention.