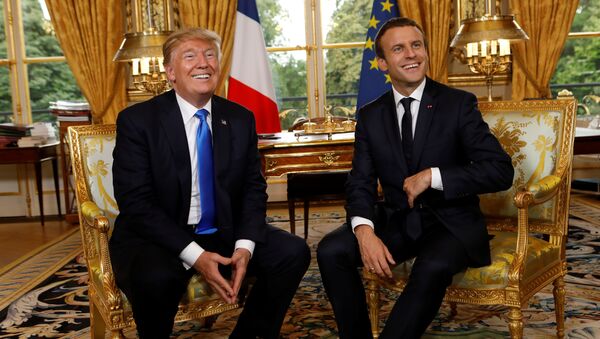 © REUTERS / Kevin Lamarque
Subscribe
International
India
Africa
Elysee Palace announced that US Presient Donald Trump and French President Emanuel Macron have exchanged data that, according to the announcement, confirm use of chemical weapons in the Syrian city of Douma.

US President Donald Trump and French President Emmanuel Macron exchanged data allegedly confirming the use of chemical weapons in Syria’s Douma during a telephone conversation, the Elysee Palace said in a statement on Monday.

France and the United States will also condemn the alleged use of chemical weapons in Syria at the Monday's UN Security Council meeting, the communique, released by Elysee Palace stated.

On Saturday, several media outlets, citing Syrian militants, accused Damascus of using chemical weapons in the city of Douma in Syria's Eastern Ghouta. Trump's Homeland Security Advisor Tom Bossert said on Sunday that he did not rule out military actions against the Syrian government in connection with the reports.

Paris Calls for UNSC Emergency Meeting to Discuss Alleged Chemical Use in Syria
"On Sunday, April 8, 2018, President Emmanuel Macron discussed the situation in Syria with the US president [Trump]. The President of the French Republic strongly condemned the chemical attacks against citizens of Duma in Eastern Ghouta on April 7. The French president and the US president exchanged information and analysis data, confirming the use of chemical weapons," the statement reads.

"They [Trump and Macron] decided to coordinate their actions and initiatives within the UN Security Council, which is to meet on Monday, April 9, in New York, in order to condemn disrespect for Resolution 2401, as well as the repeated use of chemical weapons," the statement also says.

The statement notes that responsibility for the chemical weapons use in Syria "must be clearly established." Macron and Trump also agreed to maintain close contact, and to hold talks again within the next 48 hours.