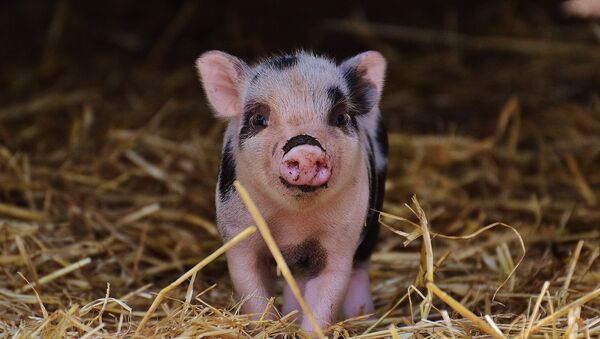 The research was published on Cell on Friday. Researchers used the CRISPR/Cas9 gene editing technique to introduce a segment of the human gene that causes HD into pig fibroblast cells. Then somatic cell nuclear transfer generated pig embryos carrying this genetic alteration.

In comparison with widely-used genetically modified mice, the pig HD model has an edge in modelling neurodegenerative diseases because it more closely matches the symptoms of the human disease, said co-senior author Li Shihua, a professor of human genetics at the Emory University School of Medicine.

"We think the pig model will fill an important gap," Li said. "In pigs, the pattern of neurodegeneration is almost the same as in humans, and there have been several treatments tested in mouse models that didn't translate to humans."

In addition, treatments for affected nervous system tissues could be better tested in pigs because their size is closer to that of humans, he said.

Kazakh Kitten Fixated by Peppa Pig
Li collaborated with his colleagues at Jinan University and the Chinese Academy of Sciences in Guangzhou, South China's Guangdong province. The pigs are now housed in Guangzhou.

The generation of the HD pig model will give an impetus to research and development in pharmaceuticals based on large animal disease models and speed progress in developing new drugs for degenerative diseases, according to the research team.

Huntington's disease, Alzheimer's, Parkinson's, ALS and the like are neurodegenerative diseases that severely threaten human health. These inherited diseases manifest themselves and become increasingly serious as people age. There is no cure, partly due to lack of matchable animal models for drug testing.