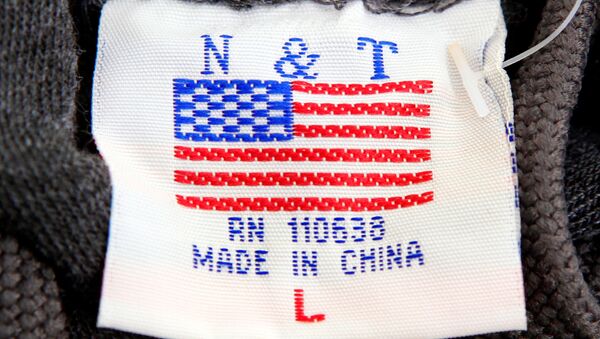 © REUTERS / Kevin Lamarque
Subscribe
While the US and China appear to be on the brink of an all-out trade war, analysts claim that both sides can still resolve their grievances in a constructive way before things get out of hand.

Nikita Maslennikov, an analyst at the Institute of Contemporary Development (INSOR), told Sputnik that even as the US and China engage in a tit-for-tat tariff exchange, it feels more like an invitation to the negotiating table rather than the beginning of an actual trade war.

"There are ways to resolve this situation, especially considering the fact that with each passing day the cost of a possible full-blown trade war between the US and China becomes more apparent," he said, adding that the consequences of such a standoff would affect business elites and political decision makers alike.

US, China Flex Naval Muscles Amid Ongoing Trade War
According to Maslennikov, if a trade war between the United States and China breaks out, the average world tariff rate may surpass 10 percent which would cause the volume of global trade to decrease by more than $2.7 trillion and drive the global economy into a recession-like state.

His concerns were echoed by Alexander Salitsky, an analyst at the Russian Academy of Sciences’ Institute of World Economy and International Relations, who warned that a trade war between Washington and Beijing would first and foremost affect the global markets for raw materials, oil and natural gas, aircraft and car manufacturing, as well as electronics and agricultural products.

READ MORE: 'Trade War With China Will Hurt US, Cause Political Problems for Trump' — Prof.

He also remarked that the United States might be in for unforeseen consequences it would definitely want to avoid, as China’s new Silk Road concept may end up strengthening the European economy.

"The Europeans may take China’s ‘One Belt One Road’ global initiative more seriously, in no small part due to Trump’s unpredictable nature and his actions. And it may eventually lead to the liberalization of trade and even to the isolation of the United States from global processes," he said, adding that the US may end up being excluded from the liberalization of trade despite championing this process for a long time.

Earlier White House spokeswoman Sarah Sanders, however, declared that US President Donald Trump would easily win a trade war with China if he takes charge of the negotiation process.

READ MORE: White House Explains How US Would Win Trade War With China

In March 2018, Trump signed an order to impose a 25 percent import tax on steel and a 10 percent duty on aluminum. It was followed by a memorandum to impose $60 billion in extra tariffs on China over allegations of intellectual property theft.

In response to this development China moved to impose a 25 percent tariff on 106 products imported from the United States.

The views and opinions expressed by Nikita Maslennikov and Alexander Salitsky are those of the analysts and do not necessarily reflect those of Sputnik.

000000
Popular comments
the trade war will end when china stops exporting rare-earth elements to the u.s.