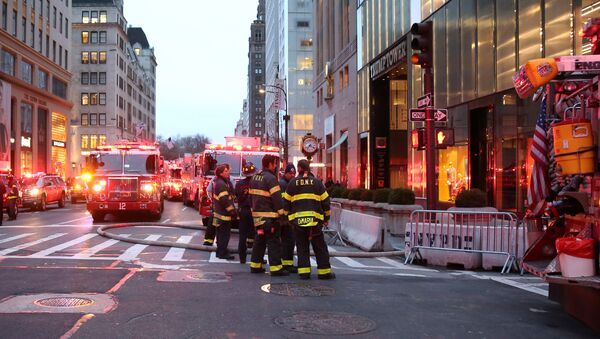 The New York Fire Department responded to a fire in the Trump Tower in New York city, as videos in social media showed the blaze expanding.

A fire burning at the Trump Tower at 725 Fifth Ave., in New York city, has been extinguished local media has reported. The blaze reportedly erupted on the 50th floor of the building. The New York Fire Department announced that it had responded to the three-alarm blaze, Reuters has reported.

US President Donald Trump tweeted that the fire was extinguished although the fire department has not corroborated his post.

This fire is expanding rapidly…….. video from a higher vantage point! pic.twitter.com/SlQtI2jgU4

There is a fire right now in Trump Tower. Was small and then something happened where the size doubled in seconds! pic.twitter.com/NnFNHEfJBg

​Several witnesses on social media reported that the fire started small but expanded rapidly. The New York Fire Department reported four firefighters and one civilian injured. US President Donald Trump was in Washington at the moment of fire, according to reports.

We had many floors to search, and stairways, and right now the only civilian injury is to the occupant of that apartment. There are four Firefighters with non-life-threatening injuries —#FDNY Commissioner Nigro gives update on 4th alarm, 721 5th Ave Manhattan