Russian Embassy: UK Welcomes You EXCEPT if You're Skripal's Niece 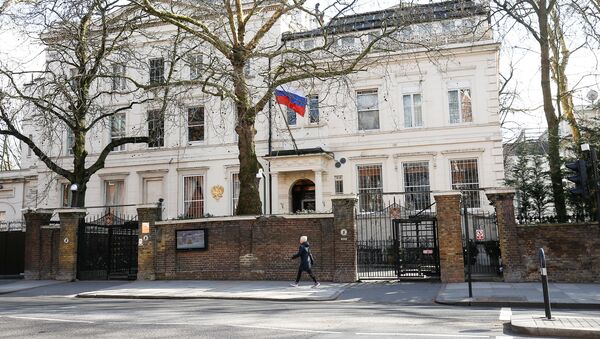 © REUTERS / Henry Nicholls
Subscribe
International
India
Africa
The British Embassy in Moscow tried to reassure ordinary Russians that they are welcome in the UK despite the diplomatic row over the Skripal case. Russian diplomats in the UK, however, mocked their statement, pointing out that your relatives could hurt your chance to visit the country.

The Russian Embassy in the UK filled the gap in a tweet from the UK embassy in Moscow dispelling concerns of “ordinary Russians” over the difficulties with visiting Britain with one compromising detail.

The UK diplomats claimed in their video, that they welcome Russian citizens coming for tourism, study and business and “extend the hand of friendship to the people of Russia.” Their Russian counterparts pointed out that one fact doesn’t fit in this friendly picture.

.@UKinRussia: “we would like to reassure ordinary #Russians that they should have no concerns about visiting the #UK” — of course if their name is not Viktoria Skripal! pic.twitter.com/faweBWy7QL

One of the closest relatives to poisoned ex-spy Sergey Skripal, his niece Victoria Skripal, had planned to visit them, but she has been denied entry to the UK. Her visa request has been declined on "the grounds that her application did not comply with the Immigration Rules." The British Embassy kept mum, citing the fact that the diplomatic mission does not comment on individual visa applications.

Following the announcement, Viktoria Skripal alleged in an interview with Sky News that "the British must have something to hide."
Russian Foreign Ministry Spokeswoman Maria Zakharova has said to Rossiya 1 TV that Moscow wants London to explain why it had refused to issue a visa to the woman. Commenting on the reports that the Russian state was looking to use Yulia Skripal's cousin as a "pawn," Zakharova dismissed insinuations that Victoria Skripal was linked to the Kremlin.

"Although this is utter absurdity,  we have already heard hundreds of such absurd statements from Britain," she said.

From Coma to Rapid Improvement

Ex-spy Sergei Skripal and his daughter Yulia   have been on the edge of life and death since the alleged exposure to a nerve agent at the beginning of March. They have been treated in a UK hospital since then. While Yulia has regained consciousness and is recovering, her father is no longer in critical condition; he is responding well to treatment and improving rapidly.

Before her awakening, the Russian consulate had been denied access to Yulia Skripal, despite her Russian citizenship. However after the woman regained consciousness, the Russian Embassy in London told Sputnik that they had received an urgent note from the UK Foreign Office on Yulia Skripal's condition and a proposal to grant consular access to her.

READ MORE: 'Strength is Growing Daily': What We Know So Far About Yulia Skripal's Awakening

Shortly after former spy Skripal and his daughter were found unconscious in Salisbury, UK, London accused Moscow of orchestrating  their poisoning and initiated a series of measures in response. They included the expulsion of nearly two dozen Russian diplomats and the freezing of bilateral contacts. Many of the UK's partners, including the US and much of the EU, followed suit.

Russia has rejected London's allegations, citing a lack of evidence, and calling for a joint investigation into the Skripal case. Earlier this week, the head of the Porton Down defense lab admitted that contrary to London's claims, they had failed to conclude that the poison used in the Skripal case was of Russian origin.