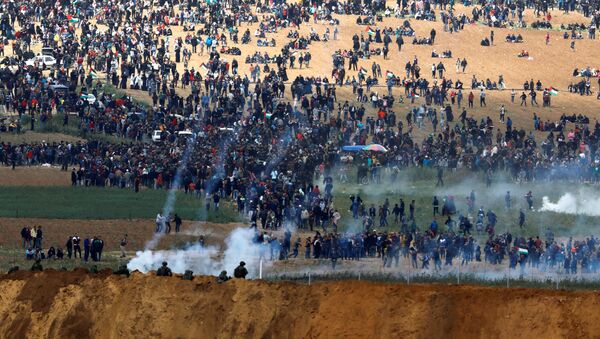 Unrest at the border of the Gaza Strip has peaked since thousands of Palestinians started a six-week-long protest on March 30 for their right to return to their former territories in Israel, while the Israeli military opens fire and uses tear gas.

So far, dozens of people, including a reporter, have been killed and hundreds have been injured in clashes on the border between the Gaza Strip and Israel. Nineteen people died on March 30, when a standoff at the border grew into clashes with the Israeli forces, making that Friday the deadliest single day in the territory since a 2014 war with the Jewish state.

On March 30 tens of thousands of Palestinians including women and children gathered in camps down the fence. The rallies, inspired by the Palestinian Islamic fundamentalist organization Hamas, commemorate “Land Day” when Arabs honor the six Palestinian protesters who were shot and killed by the IDF in 1976 and are planned to last till mid-May.

Palestinians in #Gaza are launching the biggest march in decades near the border between the #Gaza & occupied territories (#Israel)#Palestine #GreatReturnMarch #LandDay #Gaza 🇵🇸 #مسيرة_العودة_الكبرى pic.twitter.com/giZJQBnmYE

What was meant to be a peaceful standoff has grown into violent clashes; the Israeli Defense Forces (IDF), which doubled its military personnel in the area and deployed snipers, opened fire, used tear gas and other anti-riot means to prevent the protesters from crossing the border.

The IDF claimed the protesters were not peaceful, threw Molotov cocktails, stones and set tires on fire, while terrorists tried to infiltrate the Israeli territory.

This is what Hamas claims to be a peaceful protest pic.twitter.com/zDPppXdWVd

About 40,000 Palestinians were reported to protest; 19 people have been killed, with more than a thousand injured.

On March 31 hundreds of protesters returned to several areas while others buried their dead. 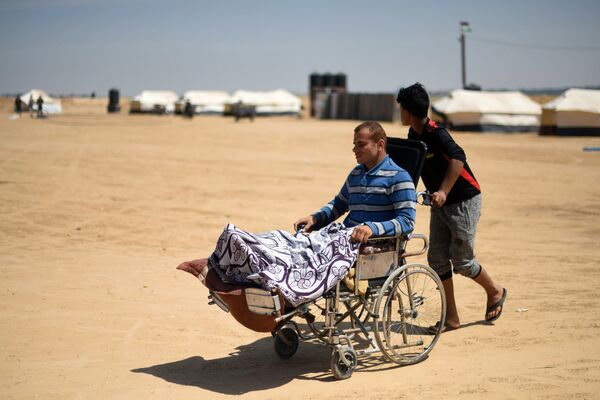 Hamas has everything to gain and Palestinian civilians have everything to lose in riots like the one that happened yesterday pic.twitter.com/AGSq3Wg5RS

The UN Security Council after an emergency meeting accused Israel of disproportionate and violent reactions against the demonstrators, while a statement urging restraint and calling for an investigation was blocked by the US.

The Israeli Defense Minister rejected the accusations, as well as excluded the possibility of such an inquiry, praising his military.

The IDF head warned demonstrators that those who approach the fence between Gaza and Israel put "their life in danger."

Later that week a Palestinian died from shot in the chest by Israeli forces. On April 5, another man was killed by an Israeli airstrike. 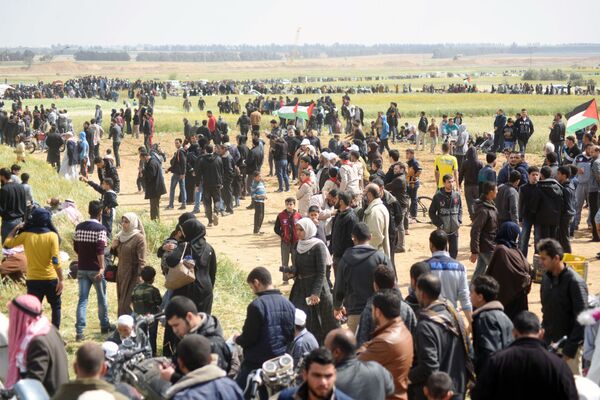 On April 6 the protests resumed with more violent clashes. Some of the protesters set tires on fire to protect themselves from Israeli snipers.

An estimated 20,000 demonstrators rallied at the border that day. Ten Palestinians, including a reporter, were killed, a Palestinian health ministry spokesman told Sputnik. Hundreds were wounded.

Weeks of Protests to Come

The protest, dubbed “The Great March of Return,” marked the so-called Land Day, an annual commemoration of the deaths of six Arab citizens killed by Israeli forces during demonstrations over 1976 government land confiscations. At the same time, the march focused on the forthcoming Nakba (disaster in Arabic), when hundreds of thousands of Palestinians were displaced after Israel announced its independence in 1948.

#Gaza tells the world enough after 11 years of ignoring her

Currently, the protesters are pressing for the return of Palestinian refugees to the territories they claim were illegally seized by Israel, while Israeli authorities demand that Palestinians settle only in Gaza and the West Bank.

In December 2017, US President Donald Trump announced his decision to recognize Jerusalem as the capital of Israel and instructed the US State Department to launch the process of relocating the US Embassy from Tel Aviv to Jerusalem.

The move prompted worldwide condemnation, sparking unrest across the Middle East, with thousands of people taking to the streets to protest the decision throughout the Arab world. As a response to the recognition, Palestinian Islamic fundamentalist organization Hamas announced the beginning of the third "intifada" against Israel.