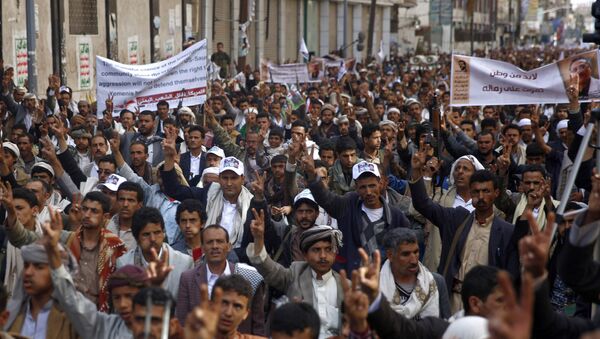 The Houthi movement, also known as Ansar Allah is ready for peace with Yemeni President Abd Rabbuh Mansur Hadi and the Arab coalition that supports him, thereby putting an end to the interference of other countries in the affairs of Yemen, a foreign relations official for foreign relations Hussein al-Azi told Sputnik.

"We are ready for peace […] that respects the pride of the Yemeni people, which will put an end to the interference in the affairs of Yemen," said Al-Azi.

He noted that the Yemeni politicians supporting President Hadi, including Foreign Minister Abdul-Malik al-Makhlafi, were "simply tools that do not solve anything, and the decision about the war is in the hands of Saudi Arabia."

"If Saudi Arabia wanted peace, this would certainly help the peace process in Yemen," he added.

Saudi Air Defenses Shoot Down Houthi Rebels' Missile Near Yemen Border - Reports
According to the representative of the Houthis, the allegations of a threat to the peace in the region and the security by Saudi Arabia are groundless, since the Yemenis just use their right to defend themselves. "Seven rockets were fired over the territory of Saudi Arabia, and 550 thousand missiles were fired at the territory of Yemen, there are double standards in assessing the situation… But Yemen is firm in upholding a fair and honest world for preserving its sovereignty, freedom and natural right to create a fair Yemeni state", said al-Azi.

Yemen has been engulfed in a violent conflict between the government headed by Yemeni President Abd Rabbuh Mansur Hadi and the Houthi movement.

Since March 2015, the Saudi-led coalition of mostly Persian Gulf countries has been carrying out airstrikes against the Houthis at Hadi's request. Millions of Yemenis remain in need of immediate humanitarian aid, according to the United Nations report.