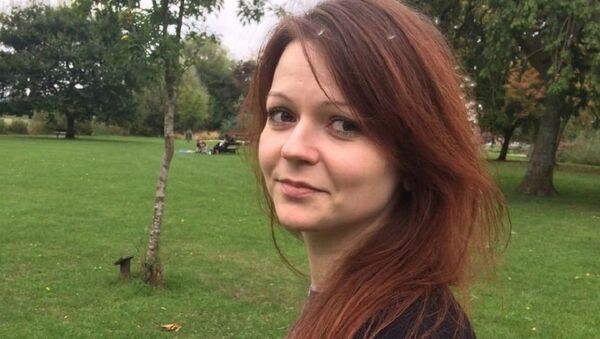 As British police say that the condition of the daughter of the Russian ex-spy poisoned in the UK is improving, Moscow received official information related to her health and is demanding consular access.

The UK's Metropolitan Police Service has issued a statement on behalf of Yulia Skripal, the daughter of the former Russian intelligence officer Sergei Skripal allegedly poisoned along with her in the British town of Salisbury on March 4.

"I woke up over a week ago now and am glad to say my strength is growing daily. I am grateful for the interest in me and for the many messages of goodwill that I have received," the statement said.

Citing respect for private life, the statement kept mum on the condition of her father, who is believed to be in critical condition in hospital right now.

The UK ambassador to the UN, Karen Pierce, for her part, said that she could not confirm whether Yulia Skripal had been contacted by police in the ongoing investigation over the Salisbury incident.

"There's a very thorough police investigation ongoing in the UK, a criminal investigation… I don't want to comment on whether or not they interviewed Yulia in the light of her statement but obviously she will be a very important person in all of this," Pierce pointed out.

Earlier, the BBC reported that Yulia Skripal had regained consciousness and the ability to talk, with Sky News claiming that "as far as we understand, she takes food and drinks in the hospital," Sky News reported.

According to Russian media reports, the British Embassy in Russia had declined to comment on the process of issuing a visa for Yulia's cousin Victoria, who earlier signaled her intent to visit the UK in order to take Yulia to Russia.

In this vein, the British Embassy referred to the fact that the diplomatic mission does not comment on individual visa applications.

READ MORE: Moscow to Keep Pushing for Inclusion in Probe Into Skripal Poisoning

Victoria Skripal in turn said that she is getting in touch with Russia's ambassador to the UK Alexander Yakovenko, and that he helped her to obtain a passport.

At a press conference in London, Yakovenko noted that Victoria has been waiting for a visa for two days, although in some cases an urgent visa can be issued within 24 hours. According to him, the problem can only be resolved by the British government.

Yakovenko also promised to help Victoria obtain accommodation if she finally arrives in Britain, adding that it's up to her to decide how long she will stay in Britain since she will come as a private citizen.

Commenting on the issue, the Russian Embassy in London told Sputnik that they had received an urgent note from the UK Foreign Office on Yulia Skripal's condition and a proposal to grant consular access to her.

"Right after the end of Ambassador Alexander Yakovenko's press conference today, we received an urgent note from Britain's Foreign Office. They informed us that after Julia Skripal regained consciousness, she was given the embassy's proposal on the organization of consular access. According to the note, she is now able to decide on whether she is ready to take advantage of our proposal, and if so, when," an embassy source said.

The source added that the embassy has immediately released contact details on those consular diplomats who would be ready to leave for Salisbury to meet Yulia Skripal right after the embassy gets the confirmation.

"We hope that the British will not drag their feet on this issue and will provide the embassy with an answer in the shortest possible time," the source stressed.

The statement came after UK ambassador to the UN Karen Pierce said that "on consular access [to Yulia Skripal], we have international obligations, we will fulfill those obligations."

"We will also take into account the wishes of Yulia herself," Pierce added.

The Skripals were found unconscious in the southern English city of Salisbury on March 4, 2018 in an alleged chemical attack thought to involve the nerve agent A-234.

Skripal Incident Likely a False Flag Attack by UK to Vilify Russia – Journalist
Shortly afterwards, London accused Moscow of complicity in the poisoning, initiating a series of measures in response, including the expulsion of nearly two dozen Russian diplomats and the freezing of bilateral contacts. Many of the UK's allies, including the US and much of the EU, followed suit.

Russia has rejected London's allegations, citing lack of evidence, and calling for a joint investigation into the Skripal case. Earlier this week, the head of the Porton Down defense lab admitted that contrary to London's claims, they failed to conclude that the poison used in the Skripal case was of Russian origin.