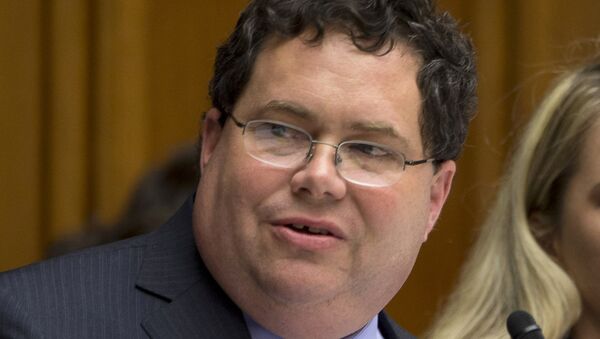 Farenthold's resignation comes months after it was revealed that he'd used taxpayer funds to settle a sexual harassment lawsuit filed by Lauren Greene, his former communications director. In total, the politician used a sum of $84,000 to make the lawsuit go away.

After the House Ethics Committee launched an investigation into the congressman's dealings in December 2017, he apologized for his behavior and his role in creating a hostile workplace and vowed to repay the taxpayer funds. It's unclear if Farenthold has repaid the amount.

In a video address Friday, Farenthold noted issues he addressed during his time in office and thanked his staff and family for standing by him through the years.

​"Since being elected to Congress in 2010, I've worked to make government more efficient and responsive, cut government spending, repeal Obamacare, protect life and reduce the debt," the Texas Republican said in his statement. "While I planned on serving out the remainder of my term in Congress, I know in my heart it's time for me to move along and look for new ways to serve."

"Therefore, I sent a letter to Governor Greg Abbott today resigning from the House of Representatives effective at 5 p.m. today, April 6, 2018. It's been an honor and a privilege to serve the constituents of the 27th district of Texas," he added.

"Leaving my service in the House, I am able to look back on the entirety of my career in public office and say it was well worthwhile."

In response to the 56-year-old stepping down, Steve Stivers, the chair of the National Republican Campaign Committee, said he hopes Farenthold still plans to issue the refund.

"I hope Blake is true to his word and pays back the $84,000 of taxpayer money he used as a settlement," Stivers said in a statement. "As I have said repeatedly, Congress must hold ourselves to a higher standard and regain the trust of the American people."

"I'm confident we'll have a Republican in this seat come November," he added.

Farenthold did not make any mention of the funds in his address.

In recent months, several politicians, including US Senator Al Franken and Rep. Trent Franks, have resigned from their posts amid sexual harassment allegations.